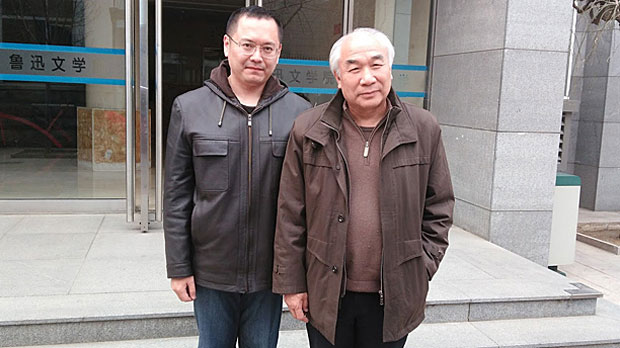 Authorities in the eastern province of Shandong have detained and questioned a Hui Muslim poet after he tweeted about growing religious oppression under the ruling Chinese Communist Party.

Poet Cui Haoxin — known by his pen name An Ran — was detained by state security police in the provincial capital Jinan on Tuesday, and questioned about a tweet about the suppression of religious freedom in China.

"Chinese religions and traditional culture were destroyed during the Cultural Revolution (1966-1976). Then the morality disappeared," read Cui's tweet sent on Oct. 27.

According to a transcript of the interview posted to Cui's Twitter account, police wanted to know his aim in writing such a thing on Twitter, which is blocked in China in the absence of circumvention tools to evade government censorship.

"Police ordered me to delete my Twitter account," Cui tweeted after his release. "I rejected them and said [social media] accounts [are] personal property."

An officer who answered the phone at Cui's local police station on Jinan's Keyuan Road declined to comment.

"If you want to enquire about this, our sub-bureau has a propaganda department ... They are authorized to talk to the media," the officer said.

Sulaiman Gu, a rights activist currently studying in the United States, said Cui had made his detention known in a brief tweet on Tuesday.

"After that we had no news at all, and nobody was able to get in touch with him," Gu told RFA.

He said Cui had also been an outspoken critic of the mass detention of an estimated one million Muslim Uyghurs, Kazakhs and other minorities in "re-education" camps in the northwestern region of Xinjiang.

"An Ran had spoken out on China's Uyghur situation, and the suppression of Muslims' religious freedom," Gu said. "His outspokenness has gotten him into trouble several times before."

"In August, the police came to his home and warned him that they'd take it further if he didn't shut his mouth," he said.

Cui wrote at the time that he was warned not to use overseas social media or to become a "tool" of hostile foreign forces.

Last April, Cui was sent on a weeklong 're-education course' in eastern China and was briefly detained in connection with his poetry and other writings that reference Xinjiang, it said.

The United Nations Committee on the Elimination of Racial Discrimination (CERD) expressed concerns in August over China’s mass internment of ethnic Uyghurs and restrictions on their religious freedom.

The panel said it was "deeply concerned" by reports that China “has turned the [Xinjiang] Uyghur Autonomous Region (XUAR) into something that resembles a massive internment camp that is shrouded in secrecy” in the name of eradicating “religious extremism” and “maintaining social stability.”

Beginning in April 2017, Uyghurs and Kazakhs accused of harboring “strong religious views” and “politically incorrect” ideas have been jailed or detained in political “re-education camps” throughout the region. Many have done nothing more than go overseas or have family members who have gone overseas.