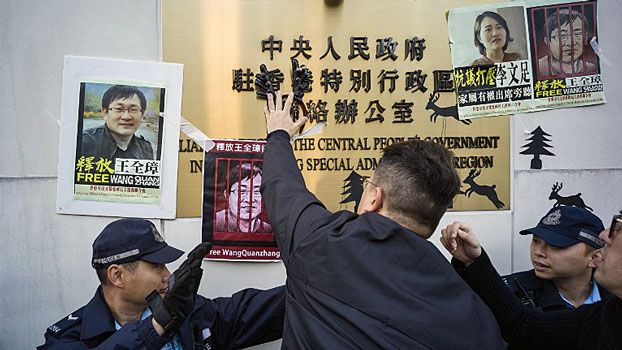 Activists tape posters of detained Chinese human rights lawyer Wang Quanzhang and his wife Li Wenzhu to signage during a rally outside the Chinese Liaison Office in Hong Kong, Dec. 26, 2018, as Wang's trial is set to begin in China.
AFP

Chinese rights attorney Wang Quanzhang, who has been held by the authorities for more than three years, stood trial for subversion on Friday in the northern city of Tianjin, in a process slammed by an international rights group as "a cruel charade."

Wang, detained in July 2015 as part of a nationwide police operation targeting hundreds of human rights lawyers and activists, stood trial for "incitement to subvert state power" at the Tianjin No. 2 Intermediate People's Court.

"Defendant Wang Quanzhang, suspected of incitement to subvert state power, will today stand trial at the Tianjin No. 2 Intermediate People's Court," the court said in a notice on its official website.

"This trial will not be open to the public because it involves state secrets," the statement said. "The verdict and sentencing will be announced on another date."

But Swedish rights activist Peter Dahlin, whose "testimony" under interrogation by Chinese police was referenced in Wang's indictment, said he had confirmed that the court had been forced to adjourn within the first minute after Wang fired his own defense attorney.

"Confirmed. #WangQuanzhang fired his state-appointed lawyer #LiuWeiguo within first minute of trial opening," Dahlin wrote via his Twitter account on the day of the trial.

According to the Los Angeles Times, Wang fired his state-appointed lawyer Liu Weiguo within minutes of court proceedings opening on Wednesday, citing a posting by Liu to a WeChat news group.

Separately, The Wall Street Journal quoted Wang's wife as also saying that Liu had been fired.

The firing could not be independently confirmed.

Calls to Liu Weiguo's phone were cut off after an RFA journalist identified themselves on Wednesday.

Cheng Hai, who had previously represented Wang, said there were no genuine state secrets involved, and that the court was acting illegally in holding the trial behind closed doors.

"The main reason is that they want to minimize the international impact," Cheng said, adding that Wang had refused to plead guilty to the charges against him.

"He wasn't happy with his lawyer, who had taken the case illegally, so I think he was going to fire him during the trial today," he said.

Wang's wife Li Wenzu said she had been prevented from traveling to Tianjin to attend the trial by Beijing state security police.

"I left home at 5.30 a.m., and there were 20 or 30 plainclothes police down there, who surrounded me," Li told RFA. "They told me that it would be a secret trial, and they wouldn't let me travel to Tianjin."

"They also got the private security guards to chase away journalists who were at the scene," Li said.

Security was also tight outside the court buildings on Wednesday, although a number of diplomats from the U.K., the U.S., Germany and other nations tried to attend the trial, amid a strong international media presence.

Rights activist Yang Chunlin was taken away from outside the court buildings after he chanted slogans in support of Wang.

"What has this fascist, totalitarian regime turned China into?" Yang shouted, before being taken away by police.

Supporter Wang Su'e said she was detained before she got anywhere near the court buildings.

"The plainclothes police surrounded me, and put me onto a bus, then they took me to a police station somewhere in Hebei, and told me to cooperate," she said.

“This is a sham trial in which Wang Quanzhang is being persecuted only for peacefully defending human rights,” Amnesty International China researcher Doriane Lau said in a statement.

“Wang Quanzhang has already been unjustly held for more than three years, during which his family suffered the anguish of not knowing whether he was alive until recently. He must be immediately and unconditionally released," Lau said.

Wang was taken away by police on Aug. 3, 2015, but his family was not informed of his whereabouts until July 2018, when a lawyer hired by Wang’s family finally met with him, saying that Wang "seemed very scared."

"Without legal safeguards, including regular access to his lawyer and his family, he remains at grave risk of being tortured and otherwise ill-treated,” Lau said.

Other human rights lawyers who were detained in the 2015 crackdown and later released have reported been beaten, made to stand for up to 15 consecutive hours and force-fed medication, the group said.

The indictment against Wang bases the subversion charge on two areas of his work for the now-shuttered Beijing Fengrui law firm, and on work with Dahlin's non-government organization (NGO), China Action, Dahlin wrote on the rights website RDSLmonitor.com, which he set up.

"There is no legal basis for the prosecution of Wang Quanzhang as presented by the prosecutor," Dahlin wrote, adding that the witnesses named in the indictment all made statements under duress.

Fellow rights attorney Wang Yu, Chen Songzhu, Xing Jianshen and Dahlin were all "held in solitary confinement, without access to a lawyer, incommunicado, and as testimony released before has shown in some of those cases, some received physical and mental torture," Dahlin said.

"Any ‘evidence’ collected through such interrogations should be inadmissible, as per Chinese law," he said.

Reported by Wong Lok-to for RFA's Cantonese Service, and by the Mandarin Service. Translated and edited by Luisetta Mudie.