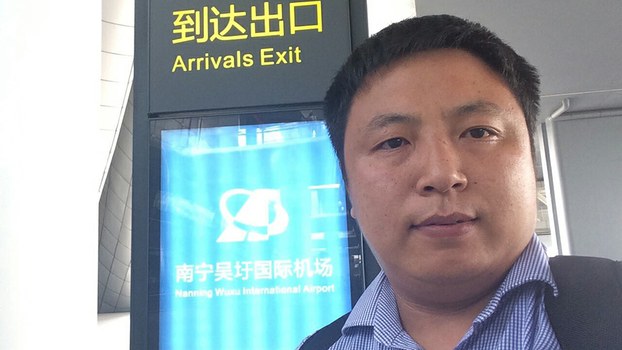 Chen Jiangang at the Nanning Wuxu International Airport in Guangxi Autonomous Region, in an undated photo.

Authorities in the Chinese capital have renewed a travel ban on a prominent attorney who was en route to the United States to take up a prestigious fellowship to study law and human rights.

Chen Jiangang was prevented from boarding flight DL128 at Beijing's International Airport on Monday by border guards, who said they had instructions from the Beijing police department not to allow him to leave China, he said in a statement published by the ChinaChange website.

Chen said officials refused to give him any written explanation for the ban, but told him that his departure would "endanger national security."

He told RFA in an interview that the ban was linked to his acting as defense attorney to fellow human rights lawyer Xie Yang, and also the fact that the Humphrey Fellowship he was traveling to take up is funded by the U.S. State Department.

"I think that both of these reasons are illegal," Chen said. "It stems from their regarding the U.S. as a hostile nation."

The Humphrey Fellowship Program was announced by then President Jimmy Carter in 1978 to finance studies at U.S. universities and institutions embodying the values of "democracy, social justice and a desire to assist the developing nations of the world," according to the program's official website.

More than 4,600 recipients have studied at more than 40 universities with funding by Congress, it said.

Chen said he has been banned from leaving China before, and that he, his wife, and the couple's two children were all added to an exit ban "blacklist" in 2017, as part of a nationwide crackdown on human rights lawyers and their families launched in July 2015.

The family was also detained and forcibly escorted back home from a vacation in the southwestern province of Yunnan in 2017, Chen said.

Chen said he was told by Beijing police on March 26 that he wouldn't be allowed to leave, but tried to board the plane anyway, "because the ticket had been booked for me by the fellowship, and they were expecting me at the university."

He said: "[President] Xi Jinping's daughter was allowed to study overseas, and yet I, as a lawyer and a visiting scholar, am not allowed?"

An official at the Beijing Entry and Exit Bureau border guard station said Chen must be on a blacklist, to have been denied permission to board his flight.

"The staff on the ground will explain any information that is available on the system, but if they haven't been told about it, then they won't know about it," the official said. "There isn't any written notification."

Chen was instrumental in exposing the torture of Xie Yang, who was initially detained on July 11, 2015, then held under "residential surveillance at a designated location" in a government guesthouse belonging to the National University of Defense Technology in Hunan's provincial capital, Changsha.

Subjected to abuse including deprivation of food and water, Xie was tortured again after being moved to the police-run Changsha No. 2 Detention Center following his formal arrest on Jan. 9, 2016.

Xie was subjected to confinement in a "hanging chair" made of plastic chairs stacked high above the ground for hours at a time, so that his legs swelled up and he was in excruciating pain, he told his lawyers.

He was also deprived of sleep and repeatedly beaten, humiliated, and taunted with death threats against his family, according to copious and detailed notes made public from meetings with his lawyers, including Chen.

Reported by Wong Siu-san and Tam Siu-yin for RFA's Cantonese Service, and by Wang Yun for the Mandarin Service. Translated and edited by Luisetta Mudie.