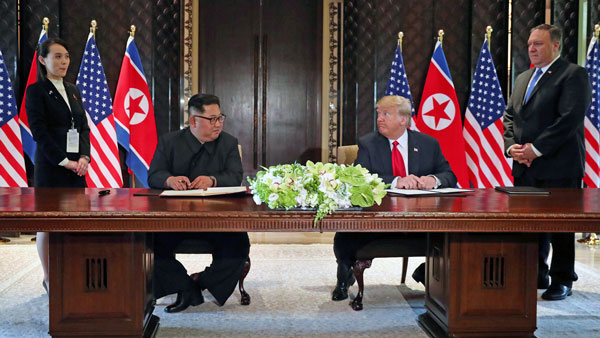 US President Donald Trump (2nd from R) and North Korea's leader Kim Jong Un (2nd from left L) look at each other before signing documents acknowledging the progress of their talks and pledging to keep the momentum going after a summit on Sentosa Island in Singapore, June 12, 2018. Standing beside them are Kim Yo Jong (L), sister of Kim Jong Un, and US Secretary of State Mike Pompeo (R).
Reuters

China on Tuesday called for an easing of sanctions against North Korea in the wake of a summit between U.S. President Donald Trump and North Korean leader Kim Jong Un that resulted in a broad-brush statement on denuclearization.

Analysts meanwhile said China's presence was very clearly felt at the summit as North Korea's closest ally, and that Kim's negotiating strategy had likely been hammered out with Beijing's blessing.

"We hope that the two countries’ highest leaders can dispel interference, establish mutual trust, overcome difficulties, and reach a basic consensus on promoting and achieving the denuclearization of the peninsula and promoting and establishing a peace mechanism for the peninsula,” Wang told reporters.

He said China views the Korean Peninsula nuclear issue as a security issue, and would welcome a peace agreement, adding: "I think nobody can doubt the extremely unique and important role China has played. And this role will continue."

Hong Kong journalist and political commentator Lawrence Ho said Kim had paid two visits to China earlier this year, and its negotiating stance had only emerged after secret talks with President Xi Jinping.

"Following those secret talks, Kim Jong Un put forward his key demands for the summit with Trump, which included separating the agreement into phases with certain benefits at each stage from the United States and South Korea," Ho said. "These principles were only firmed up after the meeting between Kim and Xi in Dalian."

He said China had also allowed Kim to fly from Pyongyang to Singapore on an Air China aircraft, sending a very public message about its involvement.

"Some Hong Kong media were saying that actually Xi Jinping is in the background of all of this, because Kim became more emboldened after his meeting with Xi," Ho said.

"So, while the positions of Beijing and Pyongyang aren't entirely the same, we know that China would definitely be happy to see the denuclearization of the Korean peninsula ... because that would be in Beijing's interests," he said.

Xia Ming, a political science professor at the City University of New York, said there are also political risks to China from a growing rapprochement between North Korea and the U.S. and its allies, however.

"I think up until now, China has benefited from the stalemate situation," Xia said. "From its point of view it doesn't really want to see a result from bilateral talks [between the U.S. and North Korea]."

But he said China didn't want talks to collapse, either.

"The worst case scenario would be the total collapse of negotiations, which would bring untold tensions, possibly even war, to the Korean peninsula," Xia said.

"Neither does the Chinese government want to see a best-case scenario in which the U.S., Japan, and South Korea start to give economic rewards for North Korea's agreement to a denuclearization program, which could send North Korea in a more liberal direction without dealing with the issue of U.S. troops on the Korean peninsula," he said.

Xia said a more liberal and pluralistic North Korea would likely eventually result in the reunification of the two Koreas, too.

"China doesn't want that to happen," he said. "I think from China's point of view, its best-case scenario would be that the Singapore communique was just a piece of paper, there for show, and yielding nothing of substance," he said.

Ho agreed that China doesn't want tensions to go back to previous levels.

"I don't think China wants to see a sudden breakdown in bilateral talks between North Korea and the U.S., which would bring us back to square one," he said.

"But even if that happens, Kim Jong Un has now repaired the bilateral relationship with China, and now he enjoys behind-the-scenes support from two major heads of state, Xi Jinping and [Russian President Vladimir] Putin."

Sources have indicated that there is some uncertainty over which parties would sign any official peace treaty ending the Korean War (1950-1953), a pledge made by Kim and his South Korean counterpart Moon Jae-in at their historic meeting at the 38th Parallel in April.

The armistice agreement was signed by the United Nations, which represented the U.S. and numerous allies, North Korea's Korean People's Army, and the Chinese People's Volunteer Army.

While Xia said Beijing likely fears being sidelined in any new peace process, Ho said the signatories to any peace treaty would likely include the original parties to the armistice.

Xia said, however, that the status of the PVA was in doubt, as it was a voluntary force sent by the Chinese Communist Party to help the war effort, rather than a formal army of a sovereign state.

Reported by Lin Ping and Gao Feng for RFA's Mandarin Service, and by Wen Yuqing for the Cantonese Service. Translated and edited by Luisetta Mudie.

I'm a bit surprised to hear anyone tell the truth as you did, though, I do believe somewhat buffered when speaking of China's influence over NK.
I have said for decades that NK does nothing without orders from China, NK never acted on its own.
The only reason this came to a peaceful conclusion was simply because Trump refused to allow this nonsense to continue.
Would the US have gone to war?
Good question, but apparently China believed we would and let NK off its leash.