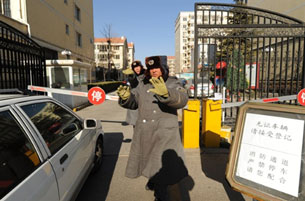 “Today marks Liu’s 55th birthday. If he serves out his 11-year sentence, he would be more than 60 years old by the time he is released,” said Lee Cheuk-yan [in Mandarin, Li Zhuoren], vice chairman of the Hong Kong Alliance in Support of Patriotic Democratic Movements in China.

“He was arrested and sent to jail because of Charter 08, because he exercised his right to freedom of speech. This is absolutely unacceptable; we are dealing with an absolute dictatorship that persecutes rights defenders. That’s why we call on the Chinese authorities to release Liu Xiaobo,” Lee said.

Liu was jailed for 11 years in December 2009 on subversion charges after co-authoring Charter 08, a petition calling for political reform.

“Many of our Chinese compatriots hope that Liu will persevere. We have every confidence that he will adhere to the ideals of democracy and human rights in China,” Lee said.

Liu has been refused visits from his wife, Liu Xia, who has been under house arrest at the couple’s Beijing apartment since he was named the recipient of the Nobel Peace Award in October.

The democracy activist's lawyer, Shang Baojun, said that he had contacted Liu Xia’s family last week, and that they told him they were applying for permission to visit the jailed activist.

Rights groups say family visits to the jailed activist have been suspended, despite a law in the Chinese constitution that guarantees them the right to see him once a month.

“Liu Xia hoped to see him. She was unable to see him in either November or December. She hopes she can see him today. I haven’t received any news about whether she would be able to make the trip,” Shang said.

Gao Yu, a long time friend of Liu Xiaobo and a veteran journalist, said that Liu Xia purchased a new cell phone on Oct. 11, but that authorities immediately blocked the service.

Gao said Liu Xia, who has been under house arrest for two months and 17 days, sorely misses her husband.

“[The authorities] can’t say that because you are the wife of the Nobel Peace Prize winner you can’t go to prison to visit him. This is inhuman and contradicts the law. They should let Liu Xia see her husband and compensate her for the time she could not see him over the last two months,” Gao said.

According to an anonymous source close to the family, Liu Xia’s mother and brother are allowed to visit her at her home, but are forbidden from releasing any news about her situation to the public.

"There is absolutely no legal basis for any of the measures taken against her by Beijing officials," the group said.

"CHRD is concerned that Liu Xia may continue to face illegal house arrest for an extended period of time, and we reiterate our call for an immediate end to her persecution."