Abnormalities among newborn babies is a serious problem in China, but details are scarce.
2010-12-22
Tweet

China's coal-producing northern Shanxi province is reeling from the highest birth defect rate in the country, but the cause is unclear as experts tread carefully on a hot political issue shrouded in secrecy, an RFA investigation has revealed.

The dilemma is particularly evident in the province's mountainous Luliang region, where the birth defect rate has soared to the world's highest.

Doctors who carried out a survey in 2004 in Luliang discovered that the birth defects were due to deficiency in folic acid, a form of vitamin B found in foods like leafy green vegetables, beans, and orange juice, but the findings have been questioned.

"It was because of the folic acid deficiency or the lack of vitamin B12 in their nutrition," Lin Liangming, a doctor at the Beijing-based Capital Institute of Pediatrics who led a survey of 160,000 people in the Luliang region told RFA.

The 2004 study stunned researchers who found Luliang's birth defect rate, at 8.44 percent, the highest in the world.

Birth defects are abnormalities among newborn babies that cause physical or mental disability. Some may be fatal.

Neural tube defects—defects involving the brain and spinal cord—are among the most serious abnormalities found in babies in Shanxi, where emissions from the province’s large coal and chemical industry have been blamed for the problem. 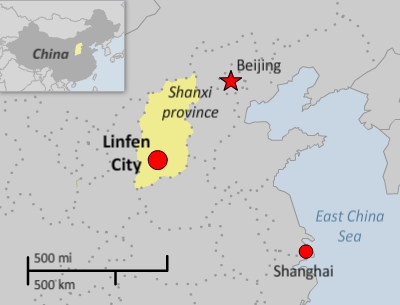 Having identified folic acid deficiency as a key source of the problem, the Shanxi Provincial Family Planning Committee and Capital Institute of Pediatrics jointly carried out a project from 2004 to 2008 to help lower the birth-defect rate.

The project was acclaimed a roaring success.

In a 2008 report, the Shanxi Provincial Family Planning Committee boasted that the birth defect rate had dropped from 8.9 percent in 2004 to a mere 1.4 per cent in 2007 in Zhongyang, one of the counties in the province.

The once heavily sickened county's birth defect rate was then found to be lower than the three percent rate of birth defects in the world's largest economy, the United States.

“The current data on birth defects in China are all based on the statistics of the Ministry of Health, while local family planning committees just conduct local surveys,” Luo added.

Luo suggested that RFA contact the provincial bureau of health in Taiyuan, capital of Shanxi province, for further information.

But an official who answered the phone in Taiyuan refused to be either interviewed or named.

“You are calling from a foreign media outlet to which we cannot speak over the phone. To interview us you have to have a permit letter from the provincial department of propaganda,” the man said.

Peking University expert Li Zhu, who spearheaded a nationwide survey on birth defects, also doubted the acclaimed folic acid miracle supplement in Shanxi, though he said he was aware of the decline in the birth defect rate there.

The obstetrician said the decline could be attributed to the fact that more pregnant women undergo medical examinations in which, once a defect is spotted, pregnancy termination or early-term abortion is recommended.

Following a nationwide study of 250,000 women over a decade, Li reported to the Health Ministry in 2001 that China’s birth defect rate was four to six per cent. Recent media reports in China indicate that this is still the Chinese official tally on birth abnormalities.

In an article early this year, the outspoken China Youth Daily insisted that birth defects in China are increasing, citing Liu Dengfeng, the deputy director of science and education department in the Ministry of Health.

Tang Deliang, an expert at Columbia University, asserted in an interview that folic acid deficiency is "definitely related to birth abnormalities, but it is not the whole picture.”

Shanxi is notorious for coal-related pollution, and its Linfen city, near Luliang, was listed by U.S. media network CNN last December as the most polluted city in the world.

But Pan Xiaochuan, a scholar at Peking University, said the "real culprit" for the birth defects or the link between pollution and birth deformation have not been established.

As a researcher, Pan said, he is unable to get to the bottom of the problem.

“The question of birth defects is too sensitive in Shanxi,” Pan sighed.

His perception was shared by Lu Guang, a noted muckraking journalist in China.

“The topic is really sensitive. During my recent visits to Shanxi, doctors there told me nothing about it,” Lu said.

An overseas-based Chinese scientist was also stonewalled in Shanxi last year while trying to carry out research on birth defects.

“There was no way for me to conduct the planned research, as they told me that data on birth defects are a state secret,” the scientist said, requesting anonymity.

The government may be concerned over the seriousness of the problem and the potential political implications, some experts said.

“The information in Shanxi is no secret. But if people know how high the real birth defect rate is, local authorities should be responsible or will otherwise look negligent," said Xiang Jingzhou, a Changsha-based independent researcher on birth deformities.

"Then relevant cadres there might lose their opportunities to be promoted,” Xiang said.

His view is hard to dispute, as birth defects take a heavy toll on society.

In Luliang, for example, Wang Aiai, a peasant woman lost one of her teenage twin sons with birth defects in a road accident last year.

"One of them went out unattended to the nearby highway, and was killed by a car. He was 18 years old then,” the mother of four sobbed in an interview.

The sons had been suffering from excess liquid in the brain since birth.

“After my son died, I thought the Shanxi highway management authorities were partially responsible. Then I petitioned various offices for a year but received no answer,” Wang said.