Interview: ‘The Ideas The Students Came Up With Were Very Good’ 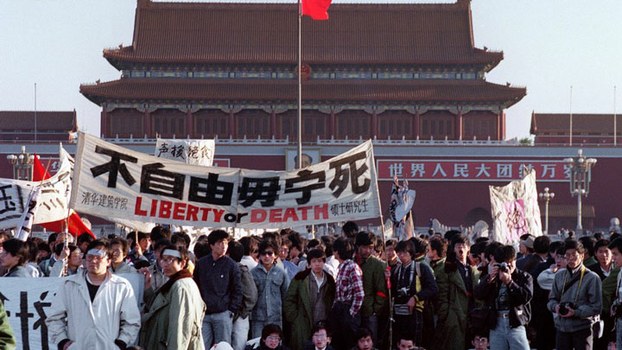 Students and local people gathered at Tiananmen Square in Beijing after an over-night hunger strike as part of the mass pro-democracy protest against the Chinese government, May 14, 1989.

Thirty years after late supreme leader Deng Xiaoping ordered the People’s Liberation Army to clear Beijing of protesters, ending weeks of student-led protests on Tiananmen Square with tanks and machine-gun fire, former top ruling Chinese Communist Party official Bao Tong spoke to RFA's Mandarin Service. Bao, a former secretary to late ousted premier Zhao Ziyang, says something changed Deng’s mind about a previously agreed, more conciliatory approach to the student-led movement:We already had a plan in place. The plan was to let the state prosecution service decide whether or not to prosecute, and to let the courts decide whether or not to sentence people.The students had pretty much already gone back to their campuses. Of course there was the issue of whether there was rioting. But the students were saying that we had to address the issue of democracy.We already had a plan in place to deal with this sort of thing. The plan said that if any social contradictions should arise, that they should be dealt with by means of dialogue.But the Asian Development Bank had come to Beijing [on May 4], and [the fear was] that when they saw all those students, they would think that China was unstable.Actually, we need to get something clear. China was stable. The students weren't opposing the Chinese Communist Party: they were supporting it, but they thought it had flaws, and they were making some suggestions.The ideas the students came up with, like democracy and anti-corruption, were very good ones. They wanted to solve the problems, for example corruption, using democracy and the rule of law.[The plan was] to calm the students down, and then everyone could start discussing the students’ democratic demands in a leisurely and calm manner, and how we should go about resolving them. In the case of those demands that couldn’t be implemented immediately, and for which the conditions weren’t yet right, we could have talked about how to implement them when the conditions had been met.Just imagine, if June 4, 1989 had never happened; if we had never used guns or tanks or the army ... if we had used dialogue to resolve the issues the students raised … would there have been such a lot of social tension today? Would we have such rampant corruption?Wan Li, who was chair of the standing committee of the National People's Congress (NPC), convened an internal party meeting with the NPC standing committee deputies. The plan was to put proposals before the NPC to set up a [special] committee to investigate corruption among high-ranking officials and their families. They tried to meet with Deng Xiaoping many times, but Deng’s secretary would say that his health was poor, or that he had to prepare for his meeting with Gorbachev.On May 13, Zhao Ziyang got a phone call summoning him to meet with Deng, and Zhao went. [Then president] Yang Shangkun was there too. Zhao relayed all of the proceedings of the Politburo standing committee meetings regarding the students' demands to him. And, do you know what Deng Xiaoping said? Deng said:  "All agreed."Zhao went to Deng’s residence on the afternoon of May 13, and I went to see Ziyang that same evening. I asked him if Deng had given any indications regarding the students. He said that Deng had just said [these] words: “All agreed.”So why, if he agreed to this on May 13, did he decide to go ahead with martial law [at a Politburo standing committee meeting at his residence] on May 17? I have no idea why.I'm pretty sure that Deng knew why, but he's dead now. I'm pretty sure that [then president] Yang Shangkun knew, but he's dead, too.We still don’t really know the truth about the Tiananmen massacre.Reported by Sheng Kong for RFA's Mandarin Service. Translated and edited by Luisetta Mudie.