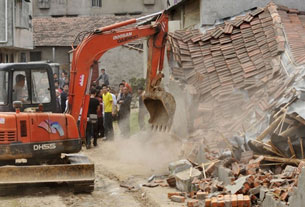 Authorities in China's troubled northwestern region of Xinjiang are holding six men in connection with the beating of an investigative journalist who had recently reported on forced evictions in Kuytun city.

Sun Hongjie, a star reporter with Kuytun's Northern Xinjiang Morning News, was pronounced "brain-dead" at a hospital in the city after the attack, which the authorities say was the result of a private argument.

"Five men attacked Sun while he was walking with Bu along Wusu street in Kuytun," the official Xinhua news agency reported.

"Sun was dragged to a nearby construction site and hit in the head," the agency said, denying "rumors" on the Internet that Sun's death was a form of retaliation for his recent expose of forced evictions.

But not many of Sun's colleagues believed the official version of events, a fellow reporter at the newspaper said.

"He was really under a huge amount of pressure," said a colleague, who declined to give his name.

"The newspaper general manager came to talk to us this afternoon, and said that it was a private dispute that had nothing to do with his newsgathering activities," the man said.

"The majority of people here didn't believe it when they announced it was the result of a brawl," he said. "But dead men tell no tales."

He added: "Morale is on the edge of collapse throughout the whole organization."

According to local police, Sun was attacked by five friends of a drinking buddy surnamed Bu late on Friday.

But Sun's colleagues described him as a highly idealistic type of journalist, who had won prizes for his reporting in the past.

"They said the people who beat him up were very young, but he wouldn't normally have much to do with people like that," Sun's colleage said.

"He was quite the intellectual and not a street yob at all. He had won a lot of journalism prizes."

A second colleague said she didn't know much about the incident.

"I only heard about all of this from others," she said. "The management hasn't told us any of the concrete details of the case."

Sun's journalism career spanned many years, including a stint on the Metropolis Consumer Morning News, and the Northern Xinjiang Morning News.

He was diagnosed with "brain death" from his injuries on Saturday morning.

However, a small but growing breed of investigative reporters risk harassment, loss of their job, physical attacks, and jail sentences if they fall foul of powerful vested interests, official or corporate.

"In view of the suspicious nature of the attack, Reporters Without Borders urges the local and national authorities to carry out a transparent investigation that examines all the possible motives," the group said in a statement.

"His colleagues say he was working on a sensitive story about the demolition of housing to make way for new homes for officials," the Paris-based group said.

Beijing police detained a prominent Chinese urologist in September in connection with an assault on science writer Fang Zhouzi, who had written about patients unhappy with a surgical procedure he had performed.

Xiao Chuanguo was arrested at Shanghai's Pudong airport on Sept. 21, and confessed to hiring the men who attacked Fang Zhouzi and those who carried out a similar earlier attack on Caijing magazine reporter Fang Xuanchang, police said.

"If the authorities want to prevent any rumours about the underlying reasons for Sun's attack, it is in their interest to conduct an impartial and exhaustive investigation," said RSF, which also publicized the attacks on the two Fangs.

Reported by Ding Xiao for RFA's Mandarin service and by Bi Zimo and Hai Nan for the Cantonese service. Translated and written in English by Luisetta Mudie.