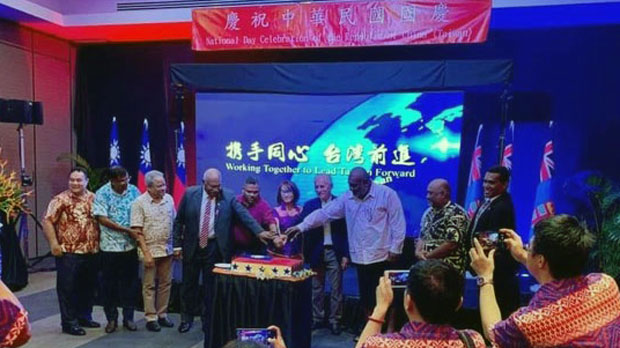 The Taiwan Office in Fiji holds a celebration to mark Taiwan's Oct. 10 National Day on Oct. 8, 2020.
Photo provided by an RFA listener

The democratic island of Taiwan said on Monday it had lodged a protest with Fiji after it emerged that one of its diplomats was taken to hospital following an assault by Chinese officials who gatecrashed an event in Suva earlier this month.

"The incident was very regrettable and we condemn China for disrupting our event, which was held peacefully," Taiwan's deputy foreign minister Harry Tseng told lawmakers.

Tseng was answering questions after regional media reported the Oct. 8 incident. He said the foreign ministry had kept the matter quiet because it was "confirming the details" of the incident.

When asked to leave, the gatecrashers assaulted a member of staff of the Taiwan representative office in Fiji, a foreign ministry spokesman said.

"The Chinese personnel were later forcibly taken away from the scene by the Fijian police, but then the police turned it around and said that the Chinese staff were attacked by our staff, to try to muddy the waters," he said.

"The Ministry of Foreign Affairs strongly condemns these serious violations of the rule of law and civilized norms by the staff of the Chinese Embassy in Fiji," the spokesman said.

The protest by Taiwan was over the refusal by Fijian police to pursue the matter, saying that the Chinese officials had diplomatic immunity, the media reports said.

The ministry dismissed claims by the Chinese diplomats that they were the ones being assaulted.

Larry Tseng, head of the foreign ministry's East Asian and Pacific Affairs department, said parties on both sides sustained injuries in the scuffles.

"Our side sustained a minor head injury ... in a scuffle, where they were pushed to the ground," Tseng said. "The other side behaved in a very arrogant manner."

"We asked the police to take them away ... but you can imagine the cozy relationship they have with the government [in Fiji]," he said.

Taiwan's foreign ministry has issued a warning to all of its missions abroad to take precautions against similar incidents in future, Tseng said.

Chinese foreign ministry spokesman Zhao Lijian responded on Monday by saying Taiwan "has no so-called diplomats" in Fiji, and that its embassy staff were "provoked by a cake" bearing the Taiwan flag, which dates back to the 1911 Republic of China (ROC) formed by Sun Yat-sen's Kuomintang, the CCP's enemy in the civil war (1927-1949).

"The report you cited is totally untrue, and Taiwan was like a thief calling 'stop the thief'," Zhao told a regular news briefing in Beijing.

"The Taiwanese institution in Fiji blatantly displayed the [ROC] flag, and its cake was also decorated with a self-styled flag," Zhao said.

Taiwan president Tsai Ing-wen, who swept to a landslide second-term victory in January 2020, has repeatedly rejected calls from Chinese Communist Party general secretary Xi Jinping that the island, which has never been controlled by the CCP, "unify" with China.

Tsai has said Taiwan's 23 million people have no wish to give up their sovereignty or way of life, and that China should first move towards a democratic system.

Xi said in a speech on Jan. 2, 2019 that China would make no promises not to use military force to annex the island. China's People's Liberation Army (PLA) has flown 217 sorties into Taiwan’s airspace in 2020, mostly by military surveillance aircraft.

A recent opinion poll found that more than 80 percent of Taiwanese would reject Xi's offer to rule the island via the "one country, two systems" model used for the former colonies of Hong Kong and Macau, especially following a brutal crackdown by Hong Kong's riot police on political dissent following months of protests in Hong Kong last year.

Taiwan was ruled as a Japanese colony in the 50 years prior to the end of World War II, but was occupied by the KMT government and troops as part of the post-World War II settlement.

Chao Tian-lin, a lawmaker for the ruling Democratic Progressive Party (DPP), said China would suffer damage to its international image from the incident.

"It's almost unheard-of for someone to carry out acts of violence like this at another country's diplomatic function," Chao said. "This behavior must have been sanctioned ... from higher up in the [Chinese] government."

Reported by Hsia Hsiao-hwa and Lee Tsung-han for RFA's Mandarin Service, and by Chung Kuang-cheng for the Cantonese Service. Translated and edited by Luisetta Mudie.