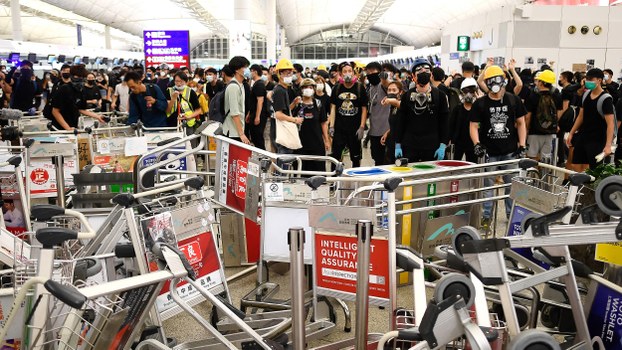 Pro-democracy protestors block the entrance to airport terminals after a scuffle with police at Hong Kong's international airport, Aug. 13, 2019.

Hong Kong's international airport reopened for business on Wednesday after a court order banning demonstrations, and amid a general ban on non-passengers, on a day that ended with riot police firing tear gas through the streets of Sham Shui Po.

"Until further notice, only departure passengers with a valid air ticket or boarding pass for a flight in the next 24 hours and a valid travel document will be allowed to enter the terminal buildings," the Hong Kong Airport Authority said in a statement on its website.

"Other members of the public ... should not travel to the airport unless absolutely necessary," it said, citing an interim injunction restraining anyone from demonstrating in all but two designated locations, or from obstructing or interfering with airport operations.

Airport authority chief Fred Lam said the decision had been taken because the sit-ins were "no longer a peaceful expression of views."

"It is not necessary to ban demonstrations at the airport in the future, but they must be within the specified limits," Lam said, adding that such gatherings would require police approval.

Meanwhile, in the working class district of Sham Shui Po, hundreds of people gathered on a main highway near the police station to burn spirit money at the start of ghost month, a period in the Chinese lunar calendar where public offerings of paper money, food, wine and incense are made to appease hungry ghosts.

Paper money bearing the faces of Hong Kong chief executive Carrie Lam and other officials were burned as "offerings" along with traditional "hell money" on the streets of the district, which has been a focal point for public anger at the police.

Riot police in helmets and shields cleared the last of the protesters from the area just before midnight, firing dozens of rounds of tear gas into mostly empty streets, with mostly local residents affected, according to video footage posted to social media.

"This is what happens when you fire tear gas at one of the most densely populated areas in #HongKong," Frances Sit, a reporter for government broadcaster RTHK posted to her Twitter account. "First aiders providing help to ppl feeling unwell who have escaped into the MTR station. I smell the tear gas even in here."

Earlier in the day, security guards set up a metal barrier at the airport and began enforcing the restrictions from around 2:00 p.m. on Wednesday.

The move came after thousands of anti-extradition protesters occupied the airport for five days in a row, prompting the authorities to cancel large numbers of flights.

During Tuesday's sit-in, two men from mainland China were assaulted and detained by protesters at the airport, who accused them of being agents of the ruling Chinese Communist Party spying on or infiltrating the protests, according to video footage widely available on social media.

A Chinese man with a backpack was surrounded by demonstrators at the airport departure hall at around 6:00 p.m. on Tuesday and beaten, after protesters found a mainland Chinese ID card and a wooden stick on him.

"I came to see off some friends from Shenzhen," the man told reporters. "My backpack was stolen for no reason, and then I was beaten. The demonstrators said that I am a policeman. Why did I try to run? Because there were so many of you, and I was scared."

In a standoff that lasted several hours, the man was prevented from boarding an ambulance by some protesters, as rumors swirled that many of those present clad in black were undercover cops deliberately sent to inflame the situation.

The second man was later identified as Fu Guohao, a reporter for the nationalist tabloid Global Times, which has close links to ruling party mouthpiece the People's Daily. He was restrained with cable ties and accused of being a mainland police officer.

He told the crowd in Mandarin, which isn't widely spoken in Hong Kong: "I support the Hong Kong police. Beat me up if you want." He later said he had refused to reveal his identity at the time for fear of reprisals, in an apparent reference to a string of highly negative coverage of the Hong Kong protests by his paper.

"At the weekend, a group of protesters has demanded a reporter from Hong Kong China News Agency to delete pictures she took," the group said in a statement on Wednesday. "On Tuesday night, a reporter from the mainland’s Global Times was surrounded by protesters. He was ... tied up."

"In order to avoid misunderstanding, HKJA also urges mainland journalists to clearly show their press cards when they cover large-scale demonstrations and rallies in Hong Kong," it said. "This will help people identify journalists and for them to decide whether they give consent to giving interviews and allowing photo-taking by journalists from their relevant organizations."

Video footage from Tuesday also showed protesters rushing in to defend a female protester who had been thrown to the floor by riot police as they intervened at the airport, snatching away a baton from one officer and beating him with it. The protesters retreated after the officer drew his gun and pointed it in their direction.

Lawmaker Claudia Mo, who heads the pro-democracy camp in the Legislative Council (LegCo), condemned the actions of the protesters.

"It's not acceptable to prevent people from getting on planes, or leaving Hong Kong, or getting home," Mo said. "The protesters themselves have acknowledged that this was wrong."

"I hope these young people will pause and take some time for reflection," she said.

An anonymous group of supporters of the anti-extradition movement that has rocked Hong Kong since early June issued a statement late on Tuesday apologizing for the protesters' actions.

"Many Hongkongers are exhausted and have become paranoid after experiencing all these fears and injustice,” the statement read, saying that protesters blockaded the airport had "overreacted" as a result of chronic stress. However, it stopped short of mention the mistreatment of the two mainland Chinese men, or the attack on the police officer.

“Being stranded for three days, cancelled flights and forced changes of itinerary are not what you deserve, nor is this what we initially aspired to do,” the statement, signed by "a group of fellow Hongkongers longing for freedom and democracy" said. "For the sake of the youngsters’ pursuit of freedom, democracy and human rights, please understand our difficulties."

China hit out at the protesters on Wednesday, saying that their actions had "seriously damaged the international image of Hong Kong."

"We express the strongest condemnation of these terrorist-like actions," Xu Luying, spokeswoman for the Hong Kong and Macao Affairs Office of the State Council, said in a statement.

"[Such] extremely abominable violent crime must be severely punished according to the law," Xu said.

But the New York-based group Human Rights in China (HRIC) said the administration of chief executive Carrie Lam has failed all along to listen to the anti-extradition movement.

"Instead of addressing the rampant violence deployed by a police force clearly ill-trained to deal appropriately with crowd control, the chief executive, echoing Beijing’s hard line, has focused on only the actions of those demonstrators engaged in more radical violent expression," HRIC executive director Sharon Hom said.

"By completely ignoring the serious physical and mental harm inflicted on the Hong Kong people, including the vast majority of peaceful demonstrators, medical workers, journalists, bystanders, and local residents, and instead prioritizing narrow economic concerns, she has shown herself not fit to lead Hong Kong out of this political crisis," Hom said.

A recent survey carried out by researchers at several Hong Kong universities found that the majority of anti-extradition protesters have a university qualification and identified themselves as middle class.

Politically, most described themselves as moderate democrats, or "localists" who want to see Hong Kong maintain its autonomy, traditional freedoms and uniqueness despite being part of the People's Republic of China, although a large number also said they had no political affiliation.

Most were primarily motivated to join the movement by a desire to see the total withdrawal of planned amendments to the Fugitive Offenders Ordinance that would allow alleged criminal suspects to be extradited to face trial in mainland Chinese courts.

Anger over police violence meted out to protesters was the second most commonly reported motivation, the survey found.

"Around 80 percent of the participants believed that the protests should continue if the government did not make further concessions other than simply suspending the extradition bill," the researchers said in a summary of their findings.

"Among them, about half supported escalating their actions, while the other half believed that the current form and scale of the protests should be maintained. Suspending the protests, however, is an unpopular option," it said, adding that more than half of those currently participating in the anti-extradition movement had also taken part in the 2014 pro-democracy movement.

"Most of the participants agreed that 'the maximum impact could only be achieved when peaceful assembly and confrontational actions work together'," the study found.

"It is interesting to note that more and more participants agreed that 'the use of radical tactics by protesters is understandable when the government fails to listen,'" the summary said.

Hong Kong's flag-carrier airline Cathay Pacific said it had fired two pilots, one of whom was arrested on suspicion of "rioting," and another whom it accused of leaking information about company operations on an online forum frequented by the anti-extradition movement, LIHKG.

A spokeswoman for the airline said the move was made "in accordance with the terms and conditions of their employment contracts."

The anti-extradition protests are calling on Carrie Lam to formally withdraw planned amendments to extradition laws that would allow alleged criminal suspects to be sent to face trial in mainland courts, to release all protesters without charge, and to stop describing the protests as riots or protesters as rioters.

Protesters also want Lam to formally dissolve the Legislative Council
(LegCo) and implement political reforms leading to fully democratic elections with public nominations both to the legislature and for the city's chief executive.

Reported by Gao Feng and Han Jie for RFA's Mandarin Service, and by Wen Yuqing for the Cantonese Service. Translated and edited by Luisetta Mudie.

Hong Kong's flag-carrier airline Cathay Pacific said it had fired two pilots, one of whom was arrested on suspicion of "rioting," and another whom it accused of leaking information about company operations on an online forum frequented by the anti-extradition movement, LIHKG.//////////Cathay Pacific used to be sympathetic to the protesters but is now down on its knees and doing exactly what China wants it to do and say. LOLLOLLOL Very soon the protesters will be on their knees begging for mercy when the PLA rolls into Hong Kong.