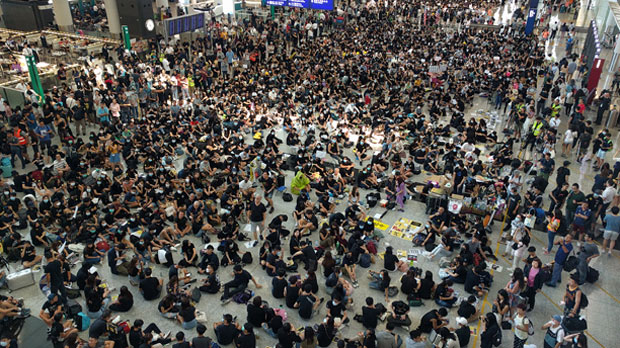 Thousands of anti-extradition protesters gathered in the arrivals hall of the Hong Kong International Airport on Friday, greeting new arrivals to the city with a rendition of "Do You Hear The People Sing!" in English and recent video footage of police violence against them.

Friday marked the first day of a planned three-day protest at the airport, where protesters told journalists they felt less likely to be tear-gassed and attacked by police in riot gear.

Chanting "There were no rioters! Only a violent regime!" and "Reclaim Hong Kong! Revolution Now!", the protesters handed out leaflets explaining their demands and apologized to visitors for the disruption.

The anti-extradition protests have called in recent weeks on the administration of chief executive Carrie Lam to formally withdraw planned amendments to extradition laws that would allow alleged criminal suspects to be sent to face trial in mainland courts, to release all protesters without charge and to stop describing the protests as riots or protesters as violent.

And they want Lam to formally dissolve the Legislative Council (LegCo) and implement political reforms leading to fully democratic elections with public nominations both to the legislature and for the city's chief executive.

"I don’t think we should just sort of make concessions to silence the violent protesters," she told reporters on Friday.

A student surnamed Lee who was busy explaining the protests to visitors at the airport said the government had never responded positively to any of the five demands.

"Hong Kong protesters have used various tactics and strategies over the past couple of months, but the government has turned a deaf ear and refused to respond, Beijing even more so," Lee said.

"We looked at strategies in other countries, and we saw that sit-ins at airports slowed down air traffic, and the government may take more notice of that," she said. "There are also large numbers of people, including tourists, at the airport, so we thought we could take this opportunity to tell them what is happening here, and why we are doing this, in different languages."

Meanwhile, police have turned down a request to hold a march in Tai Po, a new town in Hong Kong's New Territories, at the weekend, citing security risks in the wake of recent attacks.

A demonstration on Sunday will march through North Point, which a poster described as "the last bastion of Communist Party support" in Hong Kong's Eastern district.

Police changed the route of the march citing security concerns, while rights activists have asked them to investigate online reports that attacks on protesters last weekend in North Point were carried out by triad gangs with ties to the southeastern Chinese province of Fujian, and that organizations are recruiting people to come to Hong Kong and attack protesters.

The request was made by members of the Civil Human Rights Front, which organizes many of Hong Kong's mass marches, including those on the July 1 anniversary of the 1997 handover to China.

North Point Police Station was encircled by two-meter high barriers and covered in a veil of white gauze ahead of Sunday's planned protest, as public anger with police violence and the arrest of protesters grows, making police facilities into popular targets for paint-spraying and brick- and egg-throwing demonstrators.

The police force have meanwhile announced that they are bringing former deputer commissioner Alan Lau, who is credited with the handling of mass protests and civil disobedience actions during the 2014 Occupy Central movement, out of retirement to lead the police response to protests.

China’s aviation regulator on Friday demanded that Hong Kong's flag-carrier Cathay Pacific Airways ensure that no personnel who have taken part in the anti-extradition protests are allowed to staff flights in Chinese airspace from Aug. 10.

The airline said in a statement on Thursday that it respects “everyone’s right to express themselves in a peaceful and respectful manner."

But it said the company "recognizes that the Hong Kong Special Administrative Region is a part of China."

"We do not condone any activities that jeopardize the stability of Hong Kong, or any actions that may affect aviation safety," it said.

Reported by Man Hoi-tsan and Wen Yuqing for RFA's Cantonese Service, and by Lu Xi and Gao Feng for the Mandarin Service. Translated and edited by Luisetta Mudie.