Human rights activists speak out against a new regulation in China's Shanxi province that they say targets the rights of petitioners.
2008-12-24
Tweet 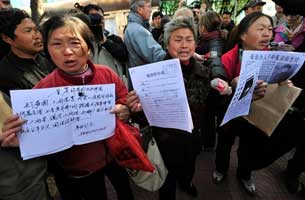 Chinese petitioners outside a courthouse in Beijing, April 3, 2008.
AFP

HONG KONG—New legislation against petitioning which blocks residents of Taiyuan, in China's Shanxi province, from seeking justice in Beijing is without legal basis, according to leading human rights activists in the country.

The legislation is in conflict with existing law, Yao Lifa, a rights advocate from China's central Hubei province, said.

"The 'Regulation on Petitions' issued by China's State Council clearly states that petitioners may voice their grievances to higher-level government offices," Yao said.

"Sending local police to detain petitioners in Beijing is simply a way to avoid resolution of the problem."

The legal wing of the city Communist Party committee in Taiyuan, capital of northern China's Shanxi province, announced the new measures against petitioners earlier this week, according to the official Taiyuan Daily.

Petitioners from Taiyuan are also banned from central government leaders' residences and from provincial and municipal government offices that don't handle petitions. They are also prohibited from organizing demonstrations in Beijing.

Sichuan-based rights activist Liu Zhengyou said all local authorities, including those in Taiyuan, have attempted to thwart petitioning in Beijing by sending local police to round up petitioners.

"Petitioners who are caught will be put in illegal prisons, in detention, placed under house arrest, or locked in mental hospitals. But to do this violates China's law," Liu said.

China maintains a "Letter and Visit Office" at various levels of the government to deal with petitions.

But Liu Zhengyou said local officials are often responsible for the problems petitioners seek to address. And after petitioners voice their grievances, it is the petitioners who are punished, rather than the officials who wronged them.

Analysts with the China Information Center rights group predict another wave of petitioning across the country next March during the People's Congress national convention.

China's current system of dealing with petitions is ineffective because it relies on the moral values of its many officials, Yao said.

"China has a huge army of petitioners. The government has spent so much money on stopping them, but they are still disappointed and hopeless. I call upon the Chinese government to end its system of 'rule of person' and to switch to one of 'rule by law.'"

"In our country there is no mechanism to rectify errors committed by officials. If you go to petition in Beijing, the person who receives you has a connection with the police from the place where you are from, and works with them to persecute you," Liu said.

"The new Taiyuan regulation is an open campaign against petitioners, and has recently appeared in Sichuan and many other places," he said.

"The space for petitioners is becoming even narrower and more dangerous. This is an illegal crackdown."