EU Must Toughen Sanctions on Cambodia After Arrest of Third Reporter in as Many Months: RSF 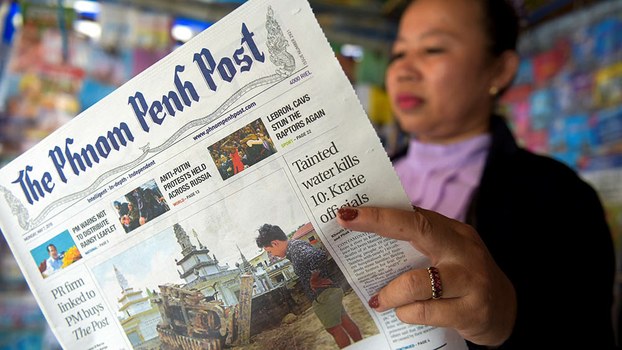 A Cambodian vendor reads the Phnom Penh Post newspaper at her newsstand in Phnom Penh, May 7, 2018.

The European Union should ramp up sanctions against Prime Minister Hun Sen’s government in Cambodia after a third reporter in three months was arrested for “inciting chaos,” Paris-based media watchdog Reporters Without Borders (RSF) said Tuesday.

A decision looms in Brussels next month over whether to withdraw Cambodia’s preferential trade treatment in response to a government crackdown on the political opposition, independent media and civil society launched three years ago. The reporters are the most recent of a long line of figures to be arrested.

Ros Sokhet, the publisher of the Cheat Khmer (Khmer Nation) newspaper, was arrested on June 25 on a warrant issued the previous day by the Cybercrime Bureau of the Phnom Penh Municipal Police for “incitement to cause chaos and harm social security” under Article 495 of the Criminal Code.

The warrant came after Ros Sokhet posted two comments to Facebook on June 24: one questioning Hun Sen’s recently declared intention to name his son as his successor, and another noting the lack of government assistance for borrowers who have been unable to repay their debts due to layoffs during the coronavirus pandemic.

Ros Sokhet was sent to pre-trial detention on June 26 and additionally charged two days later with “incitement to commit a felony” under Article 494 of the Criminal Code. He faces a maximum sentence of two years in prison, if convicted.

Cambodia’s Information Ministry has said it may revoke Cheat Khmer’s license, despite having renewed it two months ago without any issues.

On Tuesday, RSF demanded Ros Sokhet’s release, saying in a statement that his detention for the two critical posts “shows that Phnom Penh is now adopting the methods of the worst totalitarian regimes.”

“For this reason, we urge the EU to toughen the trade sanctions it recently imposed on the Cambodian government.”

The EU in mid-February announced plans to suspend tariff-free access to its market under the “Everything But Arms” (EBA) scheme for around one-fifth of Cambodia’s exports, citing rollbacks on human rights, including press freedom—a decision that would reinstate tariffs on garments and footwear beginning Aug. 12, unless it is overturned by the bloc’s governments or its parliament.

The decision will result in a loss of around U.S. $1.1 billion of the country’s annual U.S. $5.8 billion in exports to the bloc, some 75 percent of which are made up of clothing and textiles—a crucial industry in Cambodia that employs one million people.

Hun Sen has shrugged off the EU’s move, but unions have warned that the reinstatement of tariffs on Cambodian exports to the EU could leave 80,000 workers from more than 1,000 garment factories in Cambodia jobless if buyers from the bloc stop placing orders because of increased costs.

When asked by RFA’s Khmer Service about Ros Sokhet’s case on Tuesday, Ministry of Justice spokesman Chhin Malin refused to comment, saying it is a matter for the courts and that the government cannot interfere.

Amid the crackdown on the press, two other journalists have been targeted by authorities over the past three months for reporting deemed critical of the government.

Sovann Rithy, a journalist working for the online news website TVFB, was detained on April 7 for reporting a speech by Hun Sen about the coronavirus and also charged with “incitement to cause chaos and harm social security” under Article 495 of the Criminal Code.

The reporter had accurately posted on Facebook a comment by Hun Sen earlier that day telling motorbike-taxi drivers who go bankrupt because of the coronavirus outbreak to “sell your motorbikes for spending money … [because] the government does not have the ability to help.”

Sok Oudom, the owner and manager of Rithisen Radio in the seat of Kampong Chhnang province, was arrested for “incitement to cause chaos” on May 13 after broadcasting a report about a land conflict between villagers and a local military official.

Last month, journalists in Cambodia expressed concern that a new law authorizing a state of emergency to contain the spread of the coronavirus will be used by the government to restrict their ability to work.

The “Law on Governing the Country in a State of Emergency” was unanimously approved by Cambodia’s one-party legislature and signed into effect in April, despite warnings from rights groups and a United Nations expert that it could be used to unnecessarily increase already heavy restrictions on freedoms of expression, association and peaceful assembly.

RFA closed its nearly 20-year-old bureau in Phnom Penh on Sept. 12, 2017 amid a crackdown by the government that also saw the Supreme Court dissolve the main opposition Cambodia National Rescue Party (CNRP) a month later.

The move paved the way for Hun Sen’s ruling Cambodian People’s Party (CPP) to sweep the ballot in national elections in 2018, effectively turning Cambodia into a one-party state.

Cambodia is ranked 144th out of 180 countries and territories in RSF’s 2020 World Press Freedom Index.