Cambodia Slams US Sanctions on Chinese Developer as Attack on Sovereignty 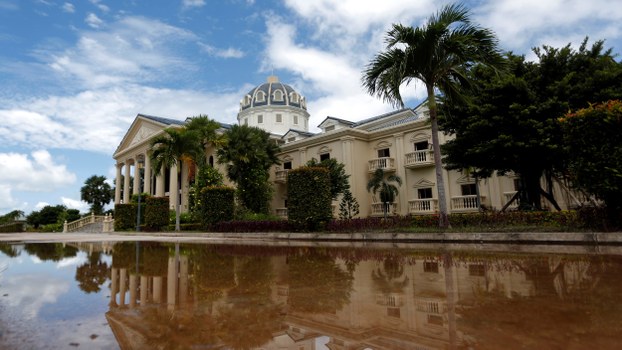 An old casino is seen at the Dara Sakor investment zone in Cambodia's Koh Kong province, in a file photo.

Cambodia’s government on Wednesday condemned the U.S. Department of Treasury’s decision to sanction a Chinese developer building a massive project in the country’s Koh Kong province over graft and rights abuses, calling the allegations “false” and saying the jungle resort plan was going ahead.

The Treasury’s Office of Foreign Assets Control (OFAC) on Tuesday sanctioned Union Development Group (UDG) for the “seizure and demolition of local Cambodians’ land” during construction of the Dara Sakor project, prohibiting the company from doing business with any U.S. citizen and cutting it off from the U.S. financial system.

The Treasury said that in order to obtain the land for the U.S. $3.8 billion-dollar project—which includes an airport, deep water seaport, and casino resort as part of an investment zone in the middle of the jungle—UDG falsified its registration to say that it was Cambodian owned before reverting to its true Chinese ownership and continuing to operate without repercussions.

UDG was designated under the Global Magnitsky Human Rights Accountability Act for “acting for or on behalf of a current or former government official, who is responsible for or complicit in, or has directly or indirectly engaged in corruption”—in this case, a Chinese-owned company acting on behalf of a Chinese official.

The Treasury said some of UDG’s “seizure and demolition” of land for the Dara Sakor project was conducted through Kun Kim, a former senior Royal Cambodian Armed Forces (RCAF) who the agency sanctioned in December last year for corruption. It said Kun Kim had directed military forces to prevent villagers from planting rice paddy fields on disputed lands, as well as burn down their houses and control their movements.

The agency also raised concerns that Beijing may be using the project to secretly build a deep-water port naval base and airstrip for military use there as part of a bid to secure its territorial claims in the disputed waters of the South China Sea. It noted that Cambodian government spokesperson Phay Siphan has said Dara Sakor could be converted to host military assets.

On Wednesday, Phay Siphan posted a message on his Facebook page denouncing the Treasury’s “false allegations” and said the agency had misquoted him.

“It is an exaggeration,” he said of the statement.

RFA’s Khmer Service was unable to reach Phay Siphan for comment on the sanctions. Calls to Kun Kim also went unanswered on Wednesday.

Sok Ey San, spokesperson for Prime Minister Hun Sen’s ruling Cambodian People’s Party (CPP), told reporters that while Washington acted within its rights in leveling sanctions against UDG, the company’s project plan was vetted and approved by the Cambodia Development Council and would proceed as planned.

“What we have done is a matter of sovereignty,” he said. “Foreign sanctions will have no impact as the development is moving forward without any obstacles.”

Sok Ey San said he did not expect that the Treasury’s decision would affect bilateral relations between Washington and Phnom Penh.

The Dara Sakor project has been mired in controversy ever since UDG’s parent company, Tianjin Wanlong Group, was granted a 99-year lease to 90,000 acres along 20 percent of Cambodia’s coastline in May 2008.

The lease, which was handed to Tianjin Wanlong without an open bidding process, provided the company with more than triple the size of any concession allowed under Cambodia’s land law and exempted it from any payments for a decade.

UDG soon began clearing large swathes of forest from Botum Sakor National Park that was included as part of the land lease and forcing hundreds of families to relocate—many of which have yet to receive compensation they were promised as part of the deal 12 years ago.

Meanwhile, much of the Dara Sakor project remains unfinished, and structures that were built—such as the casino and hotel—have been largely left to rot. Few tourists visit the area and not many companies have signed deals to set up a presence in the investment zone.

Thorng Chandara, Koh Kong provincial coordinator for local rights group Adhoc, told RFA that the project has affected residents of two of the province’s districts, “more than 1,000 families” yet to receive compensation for being uprooted.

He said residents were never informed about the development or given the opportunity to discuss how it should proceed.

Alejandro Gonzalez-Davidson, the founder of domestic environmental watchdog Mother Nature, welcomed the sanctions, saying Washington had sent Hun Sen a message that there will be more to come if he continues to abuse human rights and destroy Cambodia’s natural resources—and particularly if he allows China to build a military base in the country.

“If the government allows Chinese military installations, not only will Try Pheap or Kun Kim be targeted, sanctions will affect Hun Sen’s family as well,” he said.

“This is a message for Hun Sen to back down.”

Rampant timber trafficking in Cambodia led the Treasury Department to sanction Try Pheap, a business tycoon with close ties to Hun Sen, and 11 of his registered entities at the same time as Kun Kim. Treasury cited his establishment of “a large-scale illegal logging consortium that relies on the collusion of Cambodian officials, to include purchasing protection from the government, including military protection, for the movement of his illegal products.”

The possibility that China could establish a military foothold in Cambodia has long worried Washington. Vice President Mike Pence in 2018 wrote a letter to Hun Sen expressing fears that Cambodia might be planning to host Chinese military equipment at the Ream Naval Base in the coastal city of Sihanoukville, but Hun Sen dismissed the concerns.

Ream base was at the center of controversy last year after The Wall Street Journal in July cited U.S. and allied officials as confirming a secret deal to allow the Chinese to use part of the base for 30 years—with automatic renewals every 10 years after that—and to post military personnel, store weapons and berth warships.

The reported deal, which would provide China with its first naval staging facility in Southeast Asia and allow it to significantly expand patrols on the South China Sea, was vehemently denied at the time by Hun Sen, who said permitting foreign use of a military base in the country would “be in full contradiction to Cambodia’s constitution.”

On Wednesday, Chinese foreign ministry spokesman Wang Wenbin told reporters at a regular press briefing in Beijing that the Chinese government requires overseas Chinese companies to abide by local laws and regulations and stressed that bilateral cooperation between China and Cambodia is “open, transparent, mutually beneficial and equal.”

Wang said the U.S. “has repeatedly used unwarranted allegations that China’s relevant projects in other countries could be transformed into military bases to discredit and attack our normal cooperation with relevant countries.”

“However, the United States itself has hundreds of military bases in more than 150 countries around the world,” he said, calling Washington’s approach “hypocritical.”

Wang alleged that Washington has been “violating international law … to illegally impose sanctions on Chinese companies” in order to “contain and suppress China” and vowed that Beijing will “take necessary measures to resolutely safeguard the legitimate rights and interests of its own enterprises.”

The Chinese Embassy in Phnom Penh issued a statement on its Facebook page Wednesday claiming that the Trump administration had “exaggerated the truth” in order to sanction UDG, calling the action a violation of Cambodian sovereignty and demanding that Washington reverse course.

Cambodia isn't a sovereign nation because Hun Sen and his goon was put into power by communist Vietnam. Hun Sen refused to allow democracy and free speech. He has arrest, beat, and even kill activists seeking justice and freedom. All rights are deny by puppet Hun Sen. Until freedom and democracy is allow, how can Cambodia call itself a sovereign country? Hun Sen is a puppet dictator. He lost land, allow the looting of resources, and destroy Cambodia. It isn't a sovereign country under a dictator.