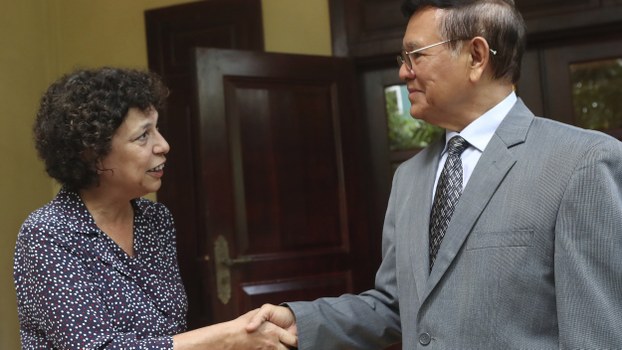 A judge in Cambodia has ended a probe into charges of treason against opposition chief Kem Sokha, heralding what could be the conclusion of his two-year old case, days after the European Union issued a damning report saying the country had failed to make the necessary improvements to its rights record to avoid the loss of a crucial trade arrangement.

In a letter sent on Friday to the lawyer of Kem Sokha, the former president of the Cambodia National Rescue Party (CNRP), investigating judge Ky Rithy of the Phnom Penh Municipal Court said he had “decided to close the investigation,” without providing further details, including if or when the case will go to trial.

Kem Sokha’s lawyer, Peng Heng, told RFA’s Khmer Service that he and the rest of the CNRP leader’s legal team will meet to discuss next steps, but vowed to continue pressing the court to drop the charges against his client, who faces up to 30 years in prison if convicted.

“We have the right to request that the judge drop the charges before the final verdict,” he said.

Kem Sokha’s daughter Kem Monovithya, who is the CNRP’s deputy director-general of public affairs, tweeted Friday that the judge’s letter means that “either the prosecutor drops the charges or takes the case to trial,” adding that she and her father’s supporters “demand that all charges be dropped.”

Kem Sokha was arrested in September 2017 for plotting to topple the government and the Supreme Court banned the CNRP two months later for its role in the alleged scheme. Prime Minister Hun Sen’s crackdown on the opposition, as well as on NGOs and the independent media, paved the way for his ruling Cambodian People’s Party (CPP) to win all 125 seats in parliament in the country’s July 2018 election.

The European Commission (EC) launched an investigation in February into Cambodia’s rights record to determine whether to withdraw the country’s status under the Everything But Arms (EBA) scheme, which allows Cambodia and other developing nations tariff-free access to the bloc’s markets for any goods that do not include arms and ammunition.

Hun Sen has dismissed the potential loss of EBA status as a form of meddling in his country’s internal affairs, but on Sunday eased restrictions on the de facto house arrest of Kem Sokha, whose case the EU has highlighted as an example of a clampdown on democratic rights in the country.

Nonetheless, in a confidential report issued on Tuesday, which RFA obtained a copy of through official sources, the EU warned Cambodia’s government that it has not taken enough steps to prevent a loss of its special trade privileges, noting particularly "further deterioration" of civil, political, labor, social and cultural rights since the review process was launched nine months ago.

Under EU law, Cambodia’s government has one month to respond to the preliminary report, at which point the EC will finalize it and make a decision in February next year on whether or not to withdraw the country’s EBA status.

As the second-largest beneficiary of EBA trade preferences, exporting 5.3 billion euros (U.S. $5.8 billion) worth of goods to the EU in 2018, a loss of status would devastate Cambodia’s economy, and particularly the lives of workers in the country’s textile industry, which accounts for around three-quarters of Cambodian imports to the EU.

On Friday, Cambodia’s Ministry of Foreign Affairs confirmed that it had received the preliminary report from the EU, saying the country’s concerned ministries will undertake a full review and submit it by the deadline next month, but slammed RFA’s reporting of its findings as “false information,” which it claimed was intended to “deceive the public.”

“[RFA’s] reference to the terms and paragraphs presented as quotations that were supposedly taken from the said report were not accurate,” the ministry said in a statement.

“Such information creates unnecessary worries among the hundreds of thousands of workers involved, misleads the public and tarnishes the reputation of government officials whom RFA claimed to have leaked the document,” it said, calling RFA “a propaganda station at the service of a political faction.”

On the day the report was sent to Cambodia’s government, CNRP acting president Sam Rainsy, who is seeking to return from exile to lead a “restoration of democracy” through nonviolent protest, had said the EU’s position could further his goals for the country by pressuring Hun Sen to reverse the political restrictions that led to Kem Sokha’s arrest and his party’s dissolution.

Since Sam Rainsy announced his intention to return to Cambodia, and called on supporters and members of the armed forces to join him on his arrival, dozens of former CNRP officials and activists have been arrested and jailed for backing the plan, which Hun Sen’s government has said is part of a coup attempt.

But on Thursday—two days after the EC sent its report to Cambodia—Hun Sen appeared to soften his stance, announcing that more than 70 CNRP activists would be released on bail “for the sake of national unity,” and urging those in hiding to return home.

RFA confirmed through CNRP officials on Friday that 75 of 88 activists had been set free as part of the release, which the government has said had “nothing to do with the EBA.”

Speaking to RFA on Friday, Moeun Tola, the executive director of the Center for Alliance of Labor and Human Rights (CENTRAL), an NGO which provides legal aid to Cambodian laborers, said he believes the conclusion of Kem Sokha’s probe and the release of the CNRP activists were the result of mounting pressure from the EU, but added that the government must do more to avoid losing EBA status.

“We must respond to the EU’s demand to drop all charges against Kem Sokha, restore political rights to more than 100 [former CNRP officials] and reinstate the CNRP,” he said.

Political analyst Mean Nee suggested that the government is trying to do as little as possible to satisfy the demands of the EU and maintain EBA status.

“I continue to hear government officials say they don’t care about the EBA,” he said.

“This is a signal that the government has no intention of positively responding to [all of] the EU’s requests.” 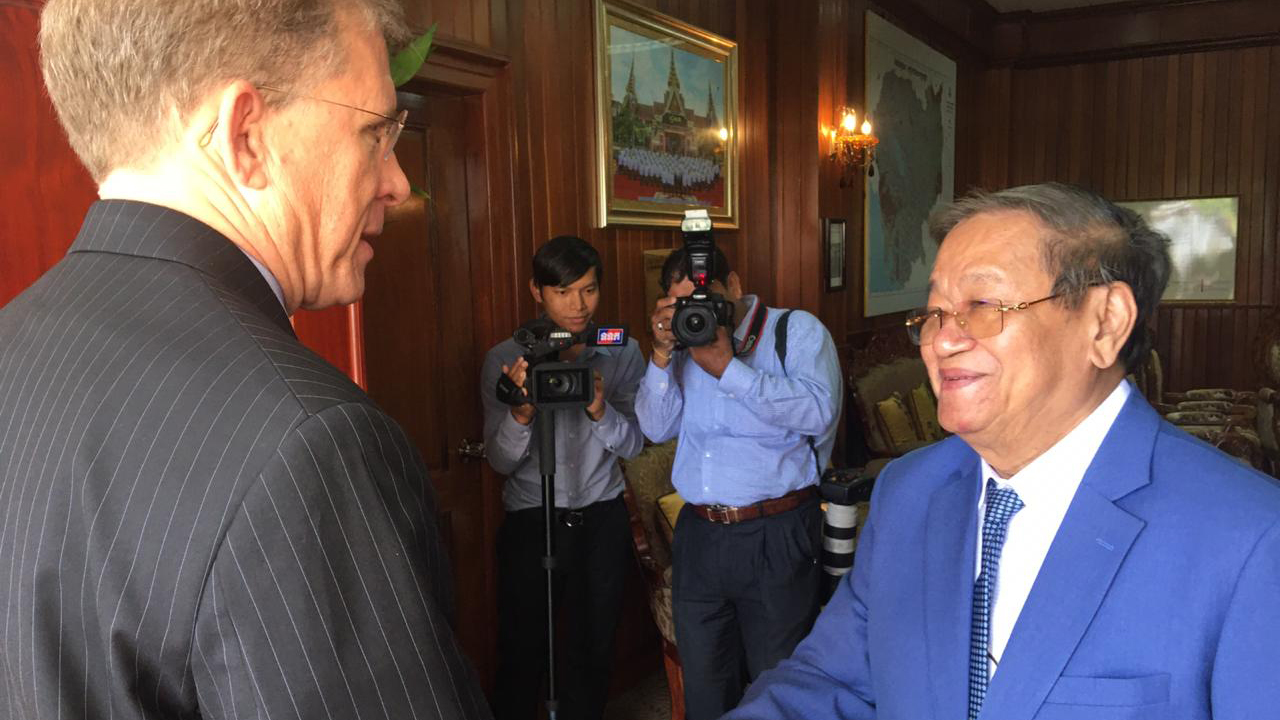 The developments surrounding Kem Sokha’s case came as U.S. Ambassador to Cambodia Patrick Murphy, who has called for the dropping of charges against Kem Sokha and met with the CNRP leader earlier this week, held talks with Minister of Information Khieu Kanharith Friday on the state of media freedom in the country.

In a message posted on its Facebook page, the U.S. embassy said Murphy and the minister discussed “the crucial role independent media plays in a democracy, and how the United States and Cambodia might work together to help restore a fully free and vibrant press in Cambodia.”

“Ambassador Murphy noted that the recent re-registration of Voice of America was an important step forward and expressed his hope that soon all Cambodians will be able to hear local radio broadcasts of Voice of America and Radio Free Asia’s important international and domestic reporting,” the statement said.

RFA closed its nearly 20-year-old bureau in Phnom Penh on Sept. 12, 2017 amid Hun Sen’s crackdown on the media, which also saw long-running outlets The Cambodia Daily shuttered and The Phnom Penh Post sold to a buyer linked to Hun Sen.

Murphy’s meeting with Khieu Kanharith came a day after New York-based Human Rights Watch urged Cambodia to drop charges against former RFA journalists Uon Chhin and Yeang Sothearin, saying their arrest on Nov. 14, 2017 and subsequent charges of “illegally collecting information for a foreign source” were part of a campaign to intimidate members of the media.

A judge in Phnom Penh ruled last month that there was insufficient evidence against the two men but sent the case for re-investigation instead of dismissing it. They face a prison term of from seven to 15 years if convicted.

Hun Sen has been and will on power as long as EU and other powerful nations fix the seriously flawed in the international system and the impunity to that perpetrated genocide. The issue in Cambodia can be removed by a technical fix from the EU and the US that a ring of genocide which was originated from the Central Highlands of Vietnam where genocide has occurred on Montagnard Dega people wast neatly fit with the terms of the 1948 UN Convention on the punishment and prevention of the crime of genocide, not in Cambodia.

I am a Cambodian person

Please, please the world don't let Hun Sen sits above the law.Cambodian people need help from outside to end dictatorship that over 30 years with the same person - Hun Sen. 90% of Cambodian people want to change but they fear of consequences.