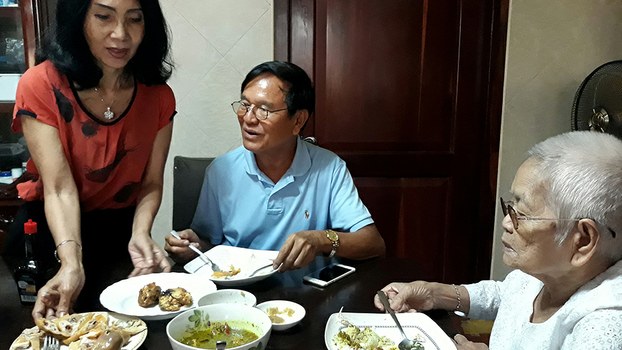 Cambodia opposition leader Kem Sokha (C) eats with his wife Te Chanmono (L) and mother Sao Nget (R) while confined by the government to his residence in Phnom Penh, September 11, 2018.

Cambodia must end the arrest and detention of opposition Cambodia National Rescue Party (CNRP) members and activists for “exercising their basic rights,” according to Human Rights Watch (HRW), which urged foreign governments and donors to press for the release of those “wrongfully detained.”

The CNRP announced in August that acting president Sam Rainsy and other senior leaders would return to Cambodia from self-imposed exile on Nov. 9 to lead a “restoration of democracy” in the country, urging supporters and members of the armed forces to join them on their return, but Prime Minister Hun Sen has vowed to arrest the opposition leaders as soon as they set foot inside the country.

Cambodia’s courts have labeled the return part of a “coup” and in recent weeks police have arrested dozens of supporters and activists of the CNRP, which was banned by the Supreme Court in November 2017 for its role in an alleged plot to topple the government.

On Sunday, HRW deputy Asia director Phil Robertson said that Hun Sen has shown little willingness to roll back democratic reversals in Cambodia and called for an external pressure campaign to secure the release of political detainees.

“The dozens of politically motivated arrests over the past three months demonstrate that Prime Minister Hun Sen’s government has no intention of lifting the heavy-handed repression that has darkened Cambodia in recent years,” Robertson said in a statement.

“Foreign governments and donors should loudly call for an end to this wave of arrests and press Cambodia to immediately and unconditionally release all those wrongfully detained for criticizing the government.”

HRW noted that more than 50 formers CNRP members have been charged with crimes and 31 jailed since the announcement of Sam Rainsy’s plan to return, and that arrests are continuing, largely on the basis of charges that include “plotting a coup,” “incitement to commit a felony,” and “discrediting judicial decisions.

The rights group called the charges “baseless and politically motivated.”

HRW said that among 50 Cambodian political prisoners it listed in an updated database is CNRP president Kem Sokha, who was taken into custody in September 2017 for “treason” and remains under de facto house arrest awaiting a trial that could see him sentenced to up to 30 years in prison if convicted.

The group also highlighted former CNRP officials Nuth Pich, who was arrested in August after organizing gatherings of party members to eat “Khmer noodles” that authorities say were acts of resistance against the opposition ban, and Thoun Bunthorn and Ngin Sophat, who were taken into custody last month after expressing support on Facebook for the return of CNRP leaders in November.

Others on the list include rights activists, dissidents, journalists, and ordinary citizens who expressed their opinions online, HRW said.

“The Cambodian government is rapidly filling its jails with activists who dare speak out about abuses, post criticism on Facebook, and meet opposition colleagues for Khmer noodles,” Robertson said.

“EU decision-makers should be considering Cambodia’s deep downward spiral on human rights when looking toward next steps on rights and trade relations,” he added, referring to the bloc’s launching of a six-month monitoring period that ended in August to determine whether Cambodia should continue to qualify for tax-free access to the European market under the Everything But Arms (EBA) trade scheme.

According to RFA’s count, at least 48 CNRP activists have been detained since the beginning of 2019 and nearly 184 subjected to interrogation by authorities over the same period. 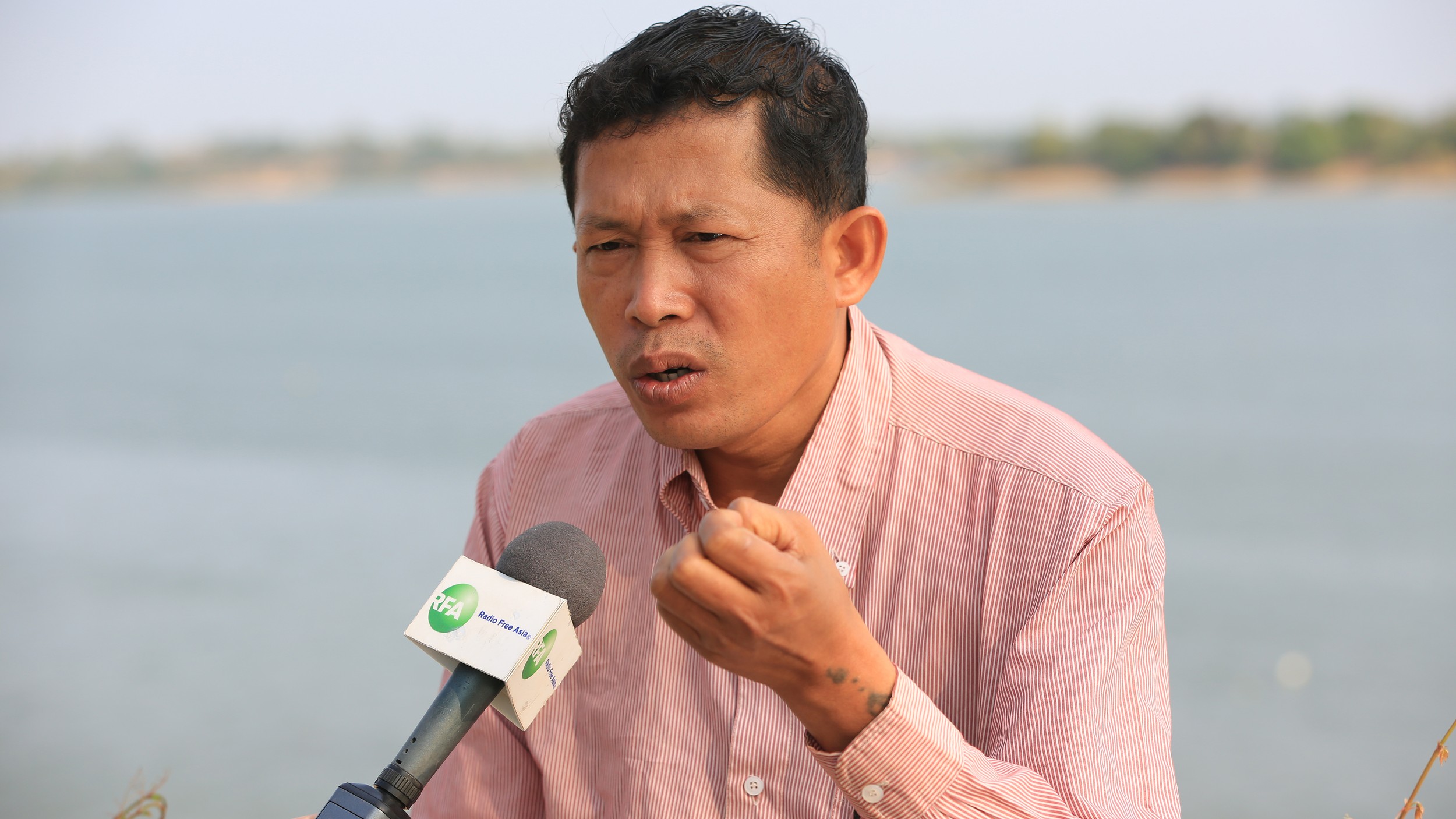 Security vehicles deployed armed police officers and members of the gendarmerie as part of a bid to arrest Siek Mekong, his brother said, but he had already gone into hiding.

“Around 10 vehicles surrounded his house this morning, packed with officers,” he said. “They posted surveillance in all directions.”

Foeun Choeun, who was appointed chief of Sre Kor commune for the CPP after the CNRP was dissolved, denied knowledge of a warrant for Siek Mekong’s arrest, while attempts to reach provincial police commissioner Mao Dara for comment went unanswered on Monday.

The attempted arrest of Siek Mekong was the latest bid by authorities to clamp down on the opposition in the province, according to CNRP activists, who described “constant monitoring” and told RFA that the situation has led some to flee the country.

Soeung Senkarona, a spokesperson for local rights group ADHOC, said that Siek Mekong is being targeted because he refused to switch allegiances to the CPP after the ban on his party, and called the attempt to arrest him “politically motivated” and an example of “harassment of local opposition members.”

“This occurred as a result of an unsettled political dispute—it doesn’t stem from any illegal act, as he is accused,” he said.

“I continue to call for a political solution in order to end the present day tension. If not, we may see a violent conflict between the two parties in the future.”

Also on Monday, former CNRP lawmaker Men Sothavrin told RFA that he and other former opposition MPs are now in South Korea, while CNRP vice president Mu Sochua is in Malaysia, and another opposition vice president, Eng Chai Eang, is in Thailand, working to organize Cambodian migrant laborers to join the planned Nov. 9 return of exiled party leaders.

“CNRP supporters from around the world will join in Sam Rainsy's repatriation,” he said.

Men Sothavrin said that CNRP officials are divided into three main groups—one engaged in advance planning in “countries neighboring Cambodia,” one that will accompany Sam Rainsy into Cambodia, and a third that will enter Cambodia soon after the acting president’s repatriation. A fourth group is “coordinating along the border of Cambodia and Thailand,” he said.

His remarks came as CPP spokesperson Sok Eysan posted comments on social media, taunting CNRP supporters that they will be welcomed to Cambodia “with handcuffs at the border,” and warning that they “might be killed with landmines.”

CNRP activist Meas Leakhena told RFA that she was not intimidated by Sok Eysan’s threats and said she had already booked a flight from the Philippines, where she has been living in self-imposed exile, to Thailand to join in Sam Rainsy’s return.

“I am not afraid of these words from Hun Sen’s regime,” she said, adding that she plans to arrive in Thailand on Oct. 28 and enter Cambodia on Nov. 9. “I am struggling for the future of my country.”

Sam Rainsy has said he will enter Cambodia from Thailand, which is home to nearly two million Cambodian migrant workers.

It is interesting if all Khmers and ex-khmers involve for reviving Khmer democracy. Left and right ideas are best to govern Cambodia. We lost a lot intellectuals and innocents Khmers during 3 previous governments, from 1953 to 1979.
I myself am a lone survivor of my family.
Look at Soviet Union, now a day Cuba, Cambodia is still better.