Critics call for transparency in a plan to invigorate a local rural Cambodian economy.
2010-12-20
Tweet 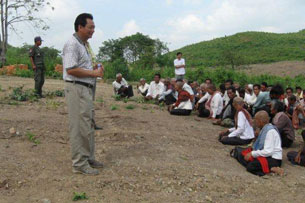 A Cambodian ruling party lawmaker says his investment in a development project in southern Cambodia will bring new wealth to the area’s rural residents, but critics say the project lacks transparency and will lead to the loss of public land.

Mong Rithy, president of the Mong Rithy Group Co. and a senator from the Cambodian People’s Party, plans to turn the remote area of Samrong Tong, in Kompong Speu province, into a tourist attraction by building roads there.

“These roads that our company is building are for everyone’s use, and once the folks from the city of Phnom Penh learn that they can access the mountaintop in this area, they will come and visit,” he said.

Mong Rithy said his company has already spent U.S. $3 million building roads in the area with the aim of creating jobs and reforesting the area.

Residents of Samrong Tong and the surrounding area make a living mainly by refining the juice of sugar palm trees into sugar to make pastries for the market.

Mong Rithy, who used to collect and refine palm sugar juice during the Khmer Rouge era of the 1970’s, called the process unsustainable and said that residents would benefit from the introduction of a tourism economy in the region.

Villagers cut the palm shoots of the borassus flabellifer, also known as the sugar palm, and collect the juice in hanging pots.

“I want them to stop [this] practice, because when they make their living this way, they have to cut down trees to use as firewood so that they can turn palm juice into sugar,” he said.

Other methods of earning income widely practiced by the hundreds of families who live in the area include logging and rice farming.

“You all can see by the places where I stopped people from felling trees for firewood during the last two years … how much forest we can save. In order to stop residents from their old practice, we need to create jobs for them.”

Mong Rithy said he also intends to turn up to 300 hectares (740 acres) of the mountain area he was granted in a concession into ranches to raise animals, corn farms, and retirement homes for Japanese and Korean senior citizens.

The top of the mountain will host a resort which he believes will draw more tourists to the area. He plans to invest at least U.S. $10 million in the tourism infrastructure and said he expects to recuperate part of that investment after five years of operation.

The investment, he said, will bring new jobs and income to the hundreds of peasant families that reside in the area.

“I’ve said all along that investors should put more of their capital into rural areas, instead of flocking to the capital or to big cities like Phnom Penh and Siem Reap to build factories there, which makes urban areas more and more crowded,” he said.

But recent reports show that economic growth in Cambodia has bounced back to five percent in 2010 from less than one percent a year ago, on the back of the expanding tourism, agricultural, and garment industries.

Chan Sophal, president of the Association of Cambodian Economists, said the investment climate in the country is finally beginning to show some positive growth and added that Mong Rithy’s project “is a positive sign for investors to look to the future.”

But he said that as the number of investments in Cambodia grows, it is essential to ensure that the country’s poor will benefit.

“Only the rich are getting richer,” he said.

While some observers applaud Mong Rithy’s plan for providing jobs to the local populace, others criticize his plan as opaque and say it is unclear whether his receipt of the land concession was completely legal.

Som Chhay, a parliamentarian from the opposition Sam Rainsy Party, said that concessions like the one granted to Mong Rithy make him “worry about the loss of public land in the future and investments that lack transparency.”

Uch Leng, a human rights activist with the Cambodia Human Rights and Development Organization (ADHOC), said Mong Rithy was granted other large concessions by the government in Kompong Som and Steung Treng provinces in a similar manner.

“The way that Mong Rithy was granted the land is not transparent because it was not published for the public. He just went to see the land and then signed with the government secretly for the investment,” he said.

Other critics have accused Mong Rithy of trying to make the mountain his own private possession, depriving the residents who rely on the area’s natural products of their livelihood.