In Cambodia, Some Hope for the Irrawaddy Dolphin 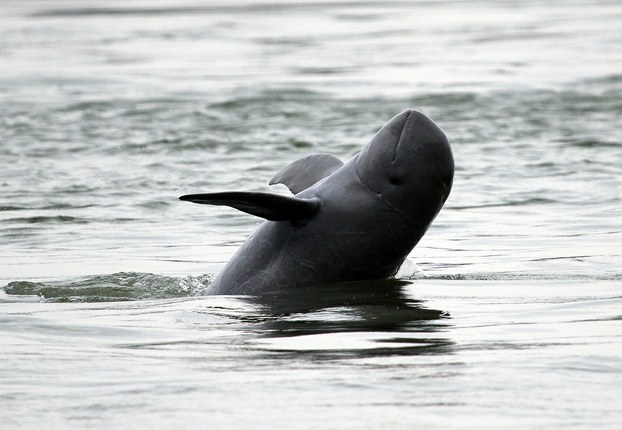 An Irrawaddy dolphin swims in the Mekong river in Cambodia's Kratie province, March 24, 2012.

There’s still some hope for the Irrawaddy dolphin as an environmental organization announced on Tuesday that they have discovered 10 new calves in the section of the Mekong River that flows through Cambodia.

While the discovery marks a bit of good news for the critically endangered species, conservationists warn that the species is still under pressure from fishing and habitat destruction – especially from the dam-building boom on the Mekong.

The population of the mammal, also known as the Mekong River dolphin, is estimated at about 80.

According to the World Wide Fund for Nature-Cambodia (WWF-Cambodia), seven calves were spotted in Kratie province and three were sighted in Stung Treng province.

While the discovery of 10 new calves gives environmentalists some hope for the species, the bodies of six dolphins were also discovered in 2016.

Irrawaddy dolphins are found in coastal areas in South and Southeast Asia, but they can only be found in three fresh-water rivers: the Ayeyarwady (Myanmar), the Mahakam (Indonesian Borneo) and the Mekong.

The Mekong River Irrawaddy dolphins inhabit a 118-mile stretch of the river between Cambodia and Laos.

If past is prologue, the 10 newly-discovered dolphins are in for a tough life as the threats they face are unlikely to disappear anytime soon.

Illegal fishing and the loss of habitat from the construction of the hydropower dams, mining and deforestation are among the main threats to the species survival.

The dolphin may be having a comeback in Cambodia, but the WWF claims the species is functionally extinct in Laos where gill nets are legal.

“WWF-Cambodia will continue to address the challenges of Mekong dolphin conservation with renewed hope and energy,” he said.

Earlier this month villagers near the Cheuteal transboundary pool between southern Laos and northern Cambodia’s Stung Treng province found that only three of the dolphins remained in the pool. Eight lived in the area in 2010.

Residents of the Preah Rumkel environmental community blamed the dolphins’ demise on the construction of the 260-megawatt Don Sahong Dam along the Mekong River in southern Laos. The dam site is less than a mile from the Cambodian border.

On Nov. 23, during a meeting in Siem Reap with leaders from Laos and Vietnam about development in the Golden Triangle area, Hun Sen said feasibility studies had been conducted and that the dam project would have no impact in terms of lack of water or fish migrations.

Civil society groups say the prime minister is turning a blind eye to other issues related to the dam's construction that are affecting thousands of people in the area.

Ek Chamroeun, coordinator of the Fisheries Action Coalition Team (FACT), a group of NGOs that advocate for fisheries issues and monitor policy reforms, earlier this month described the dam project as a disaster for food security.

“Though Hun Sen said there is no impact, we don’t agree with him,” he said. “We are concerned because we see the real impact on the communities regarding the dam project.”