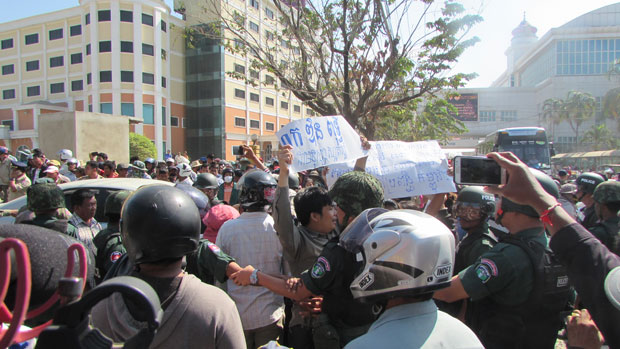 More than 50 protestors seeking the release of a local opposition party official who is facing a criminal charge in what many people think was a ‘fake” auto accident blocked National Road 5 near the Poipet International Border Checkpoint on Thursday.

The demonstrators carried banners and signs calling for justice for Din Puthy, the CNRP’s deputy head of operations in Poipet City, who was arrested on assault charges in connection with the Dec. 22 incident. Din Puthy is also president of a labor association that advocates for local moto-taxi drivers, cart pullers and other informal workers, formally known as Cambodia Informal Economy Reinforced Association.

Some of the protesters were crying and shouting, saying the charge is a ‘grave injustice’ and claiming Din Puthy did not hit immigration police officer Chhean Pisith with his SUV on Dec. 22.

Mang Puthy was charged with intentional violence with aggravating circumstances on Dec. 24 and sent to Banteay Meanchey provincial jail.

While the demonstrators were mostly friends and supporters of Din Puthy, the protest grew larger when authorities started to break it up. Two protest leaders were arrested, but later released when the demonstrators agreed to stop.

Civil society organization officials observing the protest said it was held without authorization from authorities since most protesters did not understand the legal procedures and they were in a rush as Din Puthy has been held for several days.

While Chhean Pisith was taken away in an ambulance wearing a neck brace, video footage of the incident raises questions about whether the policeman was actually hit by Din Puthy’s SUV. Many observers of the video say he was acting.

“The car stopped, and the police stood in front of the car pretending to collapse on his own or to be unconscious,” a witness told RFA’s Khmer Service. “I see unfairness in this incident as the car did not hit [the victim]."

The exact whereabouts of the police officer is unclear. According to sources, he is either getting medical treatments at a military hospital in the Aranyaprathet district of neighboring Thailand’s Sras Keo province, or he has already been transferred to a private hospital in Bangkok with a brain injury and that the military hospital could not treat.