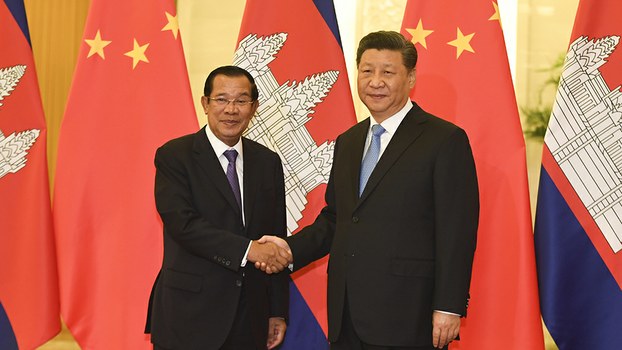 Cambodia’s Prime Minister Hun Sen returned from a weekend summit in Beijing on Chinese President Xi Jinping’s sweeping Belt and Road Initiative (BRI) laden with deals he believes will offset the impact of impending trade sanctions from the West over his regime’s rollbacks on democracy.

China held its second Belt and Road Forum for International Cooperation from April 25-27 to outline the implementation of the BRI, which aims to strengthen infrastructure, trade, and investment links between the Asian superpower and 154 countries and international organizations.

Hun Sen had joined nearly 40 other heads of state and 150 global representatives at the weekend forum, where he congratulated Xi in a speech that praised the BRI, saying it had created 20,000 jobs for Cambodians and is expected to generate another 80,000 in coming years.

On Monday, Hun Sen revealed in a Facebook post that China had pledged to provide 600 million yuan (U.S. $89 million) in military aid to Cambodia, and signed six other agreements that he said will promote Cambodian exports and Chinese investment in the Southeast Asian nation, where his government has faced international condemnation following a July 2018 election that was seen as unfree and unfair.

“The two countries signed six additional agreements to bring Cambodia-China relations to their best level ever,” he said.

“As a comprehensive strategic partners and iron-clad friends, we are siblings who share a single future,” the prime minister added.

Among the agreements Hun Sen witnessed the signing of were a memorandum of understanding (MoU) on a list of second cycle projects for production capacity cooperation, an MoU on mutual assistance in the customs sector, and an MoU that would see 400,000 tons of Cambodian rice imported to China’s market.

In addition to meeting with Xi and Chinese Prime Minister Li Keqiang during the weekend, Hun Sen said he also spoke with “major businessmen and investors in Beijing” who represent Chinese firms that vowed to “seek investment opportunities” in Cambodia.

“I want to thank our Chinese friends for paying attention and helping Cambodia enjoy progress in the present day,” he said.

Hun Sen’s trip to Beijing follows a decision by the European Union in February to launch a six-month monitoring period to determine whether Cambodian exports should continue to enjoy tax-free entry into the European market under the Everything But Arms (EBA) scheme.

The decision was prompted by a November 2017 ruling by Cambodia’s Supreme Court to ban the main opposition Cambodia National Rescue Party (CNRP), months after its president, Kem Sokha, was arrested for an alleged plot to overthrow the government.

The dissolution of the CNRP was part of a wider crackdown by Hun Sen on the opposition, NGOs and the independent media, which paved the way for his ruling Cambodian People’s Party (CPP) to win all 125 seats in parliament in the country’s July 2018 general election.

China, which offered its full support of Hun Sen’s government following the election, typically offers funding without many of the prerequisites that the U.S. and EU place on donations, such as improvements to human rights and rule of law. Chinese investment has poured into Cambodia in recent years.

On Monday, Hun Sen said he had thanked his Chinese counterparts for their support as Cambodia faced uncertainty over the EBA scheme, and that Li Keqiang had indicated Beijing’s “clear willingness to help,” in part through additional investment in Cambodia.

Hun Sen also noted that ruling Chinese Communist Party senior official Wang Huning had assured him during a meeting on Saturday that China had conducted studies on the impact of an EBA suspension, but determined “it will not cause any serious impact,” and that Beijing “will find other measures by which to help Cambodia.”

Both the World Bank and the Asian Development Bank said in recent reports that suspension of the EBA was a key external risk that could negatively impact Cambodia’s economic prospects this year and slow export growth.

Experts said Monday that deals with China would do little to address Cambodia’s larger problems.

Rong Chhun, president of the Cambodian Confederation of Unions, told RFA’s Khmer Service that China was simply “consoling” Hun Sen on the EBA issue, but as a rival garment exporter has no incentive to help Cambodia.

“I believe that if the EBA is suspended, it will have a massive impact on our workers and their beneficiaries,” he said.

“China is not capable of providing relief to Cambodia when it loses the EBA because China is an exporting country, not an importing one.”

Rong Chhun called on Cambodia’s leaders to reconsider the country’s commitments to China.

“China is just saying that it will help, but the important thing is that it is up to we who are the owners of the country [to solve our problems],” he said.

“China has its own motivations for ‘helping’ Cambodia.”

Political analyst Kim Sok told RFA that Hun Sen’s defense of the BRI suggests he was “selling Cambodia to China” in exchange for maintaining power.

“This is a method of selling Cambodia’s sovereignty, neutrality and national interests by using Cambodia to defend the Chinese,” he said.

“In return, [Hun Sen] gets nothing in terms of national interest from the Chinese … only protection for his personal power.”

Critics of the BRI say that China is using investment to push its own political agenda, and that nations involved in the initiative see their sovereignty undermined if they fall into a “debt-trap” that leaves them beholden to Beijing because they are unable to meet regular payments on loans and default.

Chinese investment has flowed into Cambodian real estate, agriculture and entertainment—particularly to the port city of Sihanoukville—but Cambodians regularly chafe at what they say are unscrupulous business practices and unbecoming behavior by Chinese residents, and worry that their country is increasingly bending to Beijing’s will.

Laos and Cambodia are confirmed to be Chinese colonies. RIP boys and girls !