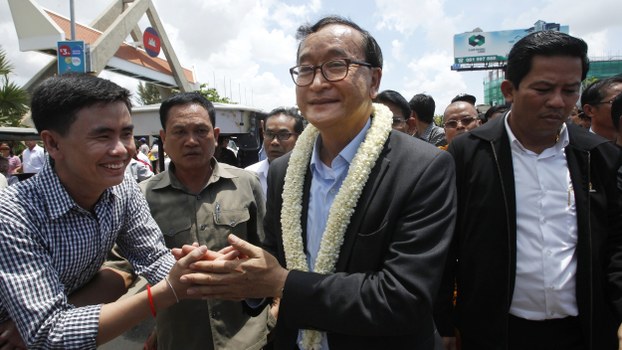 Sam Rainsy (C) greets party supporters upon his arrival at Phnom Penh International Airport in Phnom Penh, Cambodia, in a file photo taken shortly before he went into self-imposed exile.

A court in Cambodia on Thursday charged eight senior officials from the opposition Cambodia National Rescue Party (CNRP), including acting president Sam Rainsy, as well as his wife, Tioulong Saumura, with “attempting to stage a coup” in connection with the party chief’s plan to return to the country from self-imposed exile in November.

“The plan [for Sam Rainsy’s return] is a criminal act that carries a punishment of between five and 20 years,” the Phnom Penh Municipal Court said in a statement issued through the office of its spokesperson, announcing the charges.

The court also charged the nine with “intention to commit armed rebellion” as part of Sam Rainsy’s stated intention to lead a “restoration of democracy” through peaceful protests in Cambodia when he returns on Nov. 9, to coincide with the 66th anniversary of the country’s independence from France.

In its statement, the court urged those participating in the planned return to “confess,” saying they could be granted amnesty from any legal proceedings.

The new charges came amid reports that posters bearing photos of the same senior CNRP officials had been hung at crossings between the Thai-Malaysian border and the Thai-Cambodia frontier, with instructions to arrest them on sight, and after the Ministry of Foreign Affairs said last week that it had issued arrest warrants for Sam Rainsy to all 10 members of the Association of Southeast Asian Nations (ASEAN).

Authorities have stepped up harassment of CNRP activists and supporters since the party announced Sam Rainsy’s plan in August, calling on supporters and members of Cambodia’s armed forces to join him.

Police have made multiple arrests in recent weeks, bringing to at least 29 the number of CNRP activists detained since the beginning of the year and at least 158 the number subjected to interrogation over the same period, and prompting calls from Western governments and rights groups for an end to the mistreatment.

Sam Rainsy has been living in self-imposed exile since late 2015 to avoid what he says are politically motivated convictions and arrest warrants, and Prime Minister Hun Sen has vowed to arrest him as soon as he sets foot inside Cambodia.

In his absence, authorities arrested CNRP President Kem Sokha on charges of treason in September 2017 and the Supreme Court banned the opposition party two months later for its role in the alleged plot to topple the government.

The moves against the political opposition, along with a wider crackdown by Hun Sen on NGOs and the independent media, paved the way for his ruling Cambodian People’s Party (CPP) to win all 125 seats in parliament in the country’s July 2018 general election. Hun Sen has been in power since 1985.

Ou Chanrith, a spokesman for the CNRP’s “Repatriation Unit” and one of the nine charged on Thursday, told RFA’s Khmer Service that the new allegations and any associated warrants for arrest would do little to change the party’s plans for November.

“While I am afraid of the threats of arrest coming from Hun Sen’s government, this will not become an obstacle to our return,” he said, adding that “Sam Rainsy and other CNRP members will return as planned on Nov 9.”

Last week, the Phnom Penh Municipal Court issued a new warrant for Sam Rainsy’s arrest on charges of “insulting the King” after he gave an interview to RFA in which he called King Norodom Sihamoni a “puppet” of Hun Sen.

The new order to take Sam Rainsy into custody comes after the court in March made public its decision to issue arrest warrants for Sam Rainsy and seven other top CNRP officials living abroad on charges of “treason and incitement to commit felonies.”

In May, the Phnom Penh Municipal Court sentenced Sam Rainsy in-absentia to a total of eight years in prison for “demoralizing the armed forces” and “insulting the King” after he issued statements urging the military to refrain from arresting him upon his return to Cambodia and calling an election letter written by Sihamoni “fake or written under duress.”

The convictions were added to a list of those carrying sentences the opposition chief has yet to serve, including a five-year jail term for forging documents about the border shared by Cambodia and Vietnam in 2016, and a 20-month jail term for defamation after he accused Hun Sen of being responsible for the murder of political analyst Kem Ley that same year.

Also on Thursday, sources told RFA that at least 10 CNRP activists and former officials in Banteay Meanchey province have gone into hiding out of fear of arrest ahead of Sam Rainsy’s return.

Lam Bunlay, an activist from Serei Saophan district, said he fled his home on Sept. 20 after “at least 20 police officers” surrounded it and were keeping him under surveillance.

“If Cambodia’s courts were just, I wouldn’t have to flee,” he said.

A former local official named Sao Polak told RFA he also left his home on Wednesday after receiving information that police planned to arrest him because of his plans to join Sam Rainsy’s return to Cambodia.

“I and others decided to flee, even though it means that we lost our jobs and must be separated from our families,” he said.

Banteay Meanchey Provincial Deputy Police Chief Seth Las told RFA no one under his command had persecuted any opposition officials.

“I don’t know about their problems, but people in the province are living in peace,” he said.

Am Sam Ath, the deputy director of Cambodian rights group LICADHO, said CNRP activists and officials are being targeted out of political motivation, rather than implementation of the law.

“The authorities’ intentions are to prevent Sam Rainsy from returning to Cambodia,” he added.

Convention on the
Prevention and Punishment
of the Crime of Genocide.

Article 3
The following acts shall be punishable:

PM. Hun Sen used to be one of member and commander under Pon Pot Khmer Rouge regime, he deserves to be punished under international laws of crimes of genocide and crimes against humanity

Dear Cambodia, For the sake of Cambodian to live peacefully not facing the killing again and in the prosperity nation, all genocidaires under the Khmer Rouge regimes of Pon Pot must be punished under the United Nations article III of punishment and prevention of crimes of genocide, in which including PM. Hun Sen when was one of commander und Pon Pot.