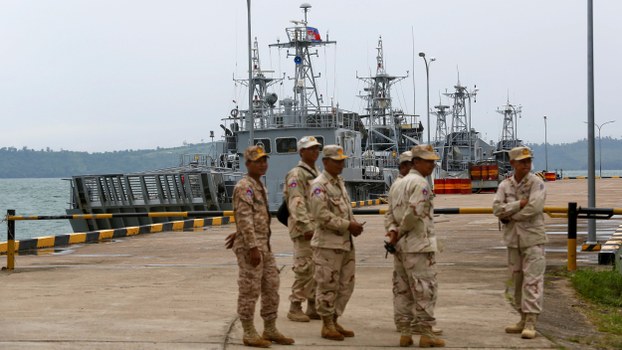 Cambodia’s Prime Minister Hun Sen defended the country’s right to expand a naval base in his first public comments following criticism from Washington over the demolition of U.S.-funded buildings at the facility and amid reports that the development is being funded by China.

Ream Naval Base in the southwestern coastal city of Sihanoukville has been a point of friction between Phnom Penh and Washington since a report in The Wall Street Journal last year cited U.S. and allied officials as confirming a secret deal to allow the Chinese to use part of the base for 30 years.

Hun Sen vehemently denied the deal at the time. A naval base at Ream on the Gulf of Thailand would provide China with its first naval staging facility in Southeast Asia and allow it to significantly expand patrols on the South China Sea. Beijing claims much of the waterway, parts of which are also claimed by Taiwan, Brunei, Malaysia, the Philippines and Vietnam.

Last week, the Asia Maritime Transparency Initiative at the Center for Strategic and International Studies (CSIS) in Washington released satellite images showing that Cambodia had demolished the Tactical Command Headquarters (TCH) of the National Committee for Maritime Security (NCMS) at Ream Naval Base in early September, saying the move “raises questions about rumored Chinese access.”

On Wednesday, Hun Sen said development at the base would allow the facility to be used by various other nations, although it would not be turned into an international port.

“Within the past few days, [the U.S.] accused Cambodia of providing Ream Naval Base for China’s exclusive use,” he said, speaking at the unveiling ceremony of a Chinese theme park in Kandal province.

“We will allow foreign ships to dock there after being granted permission because it is a military naval base. It is not only Chinese that have the right to use it—any country can seek permission to dock, refill fuel, conduct military exercises, or cooperate with Cambodia. We will welcome these activities.”

Hun Sen also instructed the Ministry of Foreign Affairs on Wednesday to release the transcript of a speech he made on June 1 in which the Prime Minister claimed “there is no authorization to allow any foreign country to use our military base in violation of our Constitution” or to establish a “foreign military base on [Cambodian] territory.”

Over the weekend, Nikkei Asia published a report saying preparations are underway at Ream Naval Base for a China-backed expansion, citing Vann Bunlieng, deputy commander and chief of the Royal Cambodian Navy general staff. The report said plans include dredging work to deepen waters surrounding the base, which can currently only accommodate smaller vessels.

RFA’s Khmer Service was unable to reach Tea Banh on Wednesday for comment, but a day earlier the Defense Minister refused to disclose which country was funding the expansion project.

“You want to know who is the source of funding and expenditure? Is it not our right [to choose]?” he asked.

Cambodia’s NCMS also sought in a statement released Monday to downplay concerns that a decision to demolish the TCH at Ream Naval Base instead of upgrade it, as originally planned, could indicate an intention to host Chinese military assets there.

It said the TCH would be relocated due to limitations of infrastructural expansion and difficulty for non-military personnel to work in a restricted area run by the Royal Cambodian Navy, among other reasons.

However, Washington remained skeptical of Cambodia’s motives Wednesday, with U.S. Embassy spokesperson Chad Roedemeier expressing disappointment in an emailed statement that Cambodian military authorities chose to demolish a maritime security facility “that is only seven years old and was a sign of U.S.-Cambodia relations.”

“We have concerns that razing the facility may be tied to plans for hosting People’s Republic of China military assets and personnel at Ream Naval Base,” he said.

“Such a military presence would negatively impact the U.S.-Cambodia bilateral relationship and be disruptive and destabilizing to the Indo-Pacific region.”

Roedemeier said Washington would welcome a dialogue with Phnom Penh about “how we can support infrastructure at Ream that would benefit an independent Cambodia and all nations supportive of a free and open Indo-Pacific.”

A day earlier, Roedemeier said in a statement that the U.S. would continue to urge Cambodia to “take all measures to protect its sovereignty” and not grant exclusive use of military facilities within its borders to any single country. He noted that facilitating access to Ream for all of Cambodia’s partners “would be in line with the country’s constitution and avoid eroding regional stability.”

Hun Sen’s comments on the Ream Naval Base came on the same day he threatened to arrest more officials with the country’s banned opposition Cambodia National Rescue Party (CNRP), whose leadership in self-imposed exile he claimed are working on a plan to topple his government and destroy an era of “peace” under his leadership.

“We won’t allow our country stumble into chaos at any cost,” he said, adding that anyone deemed to oppose his rule will be met with imprisonment.

Hun Sen’s deepening repression of the opposition and civil society, seen as an effort to extend his 35-year rule over Cambodia, has strained ties with the U.S. and with European nations, the main aid donors and trade partners who backed the reconstruction of the country since the 1990s. Phnom Penh has tilted politically and economically toward China, which asks few questions about the crackdown.

Cambodia’s Supreme Court dissolved the CNRP in November 2017, two months after leader Kem Sokha’s arrest, for its role in the opposition leader’s alleged plot to stage a coup with U.S. assistance.

At least 17 CNRP members have been detained in Prey Sar Prison since the start of the coronavirus pandemic on charges of “incitement” for comments they made deemed critical of Hun Sen’s leadership.

On Tuesday, authorities arrested CNRP commune council member Chum Sarath from his home in Pursat province, without providing his family with the reason they took him into custody.

His daughter, Chum Rompey, told RFA she is concerned for her father because he is elderly and suffers from health problems.

“I wonder if he might be mistreated,” she said. “I want the authorities release my father because he has done nothing wrong.”

Chum Ropey said her father was brought to court for questioning on Wednesday, but that she was still unaware of whether he had been officially charged. A spokesperson for the Pursat Police Commission was not immediately available for comment, while National Police Commission spokesperson Chhay Kim Kheourn said he needed to review the case before he could make a statement.

Am Sam Ath, deputy director in charge of investigation for local rights group Licadho, told RFA his organization is closely monitoring Chum Sarath’s case. He said authorities are required to produce an arrest warrant and should have informed Chum Sarath’s family why they were taking him into custody.

Chim Sarath had been in hiding for fear of arrest by authorities until his return home on Oct. 2. Hun Sen’s government has stepped up harassment and arrests of CNRP members since the party’s acting chief, Sam Rainsy, recently announced his intention to return to Cambodia from self-imposed exile in France to lead a restoration of democracy in the country.

Sam Rainsy had tried to return on Nov. 9, 2019 to lead nonviolent protests against Hun Sen, urging Cambodian migrant workers abroad and members of the military to join him, but his plan to enter Cambodia from Thailand was thwarted when he was refused permission to board a Thai Airways plane in Paris.

He was later denied entry into Indonesia after making a brief visit to Malaysia.

Responding to Hun Sen’s statement on Wednesday, Sam Rainsy said he was committed to returning to Cambodia and dismissed the prime minister’s leadership as having achieved little more than a “false peace.”