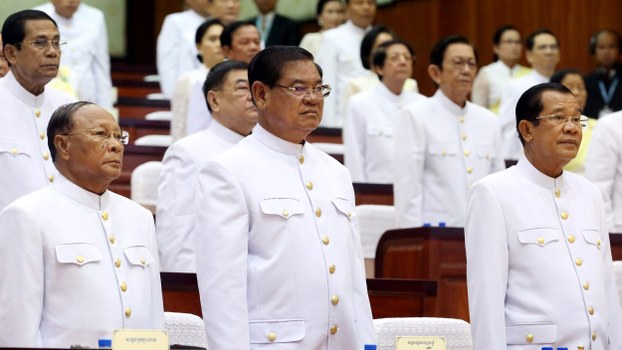 Speaking to reporters in the capital Phnom Penh, Sar Kheng said that CNRP acting president Sam Rainsy’s intention to lead protests against Prime Minister Hun Sen’s government on his return amounts to “plotting a coup,” and that anyone who backs him will face legal action.

“If they act on Sam Rainsy’s orders, that is illegal,” he said, claiming that a string of arrests targeting activists who voiced their support for the opposition leader in recent weeks does not constitute a restriction of their freedom of expression or a form of intimidation.

“Sam Rainsy breached the law by insulting the King and is planning to conduct a coup through a color revolution,” he added, referring to a recent interview in which the opposition chief called King Norodom Sihamoni Hun Sen’s “puppet,” leading to a conviction for “insulting the king” in absentia.

Authorities have stepped up harassment of CNRP activists and supporters since August, when the party announced Sam Rainsy’s plan to return to Cambodia on Nov. 9, calling on supporters and members of Cambodia’s armed forces to join him in a restoration of democracy in the Southeast Asian nation.

Sam Rainsy has been living in self-imposed exile since 2015 to avoid a string of what he calls politically motivated convictions and charges, and Cambodia’s Supreme Court dissolved the CNRP in November 2017 for its role in an alleged plot to topple the government.

Sam Rainsy’s conviction for “insulting the king” was the latest move against him by Cambodia’s courts, which in September charged him and seven other CNRP officials, as well as his wife, with “attempting to stage a coup” in connection with his planned return.

Hun Sen and other leaders in his government have vowed to arrest the CNRP chief as soon as he sets foot inside Cambodia.

He urged the ruling party and the opposition to work together to resolve Cambodia’s political crisis.

“If the activists don’t provoke any chaotic situations, then what they are doing is simply an expression,” he told RFA’s Khmer Service.

Puy Takk’s wife, Sar Sreyoun, told RFA her husband was transporting meat to a local market when he was arrested along with Hun Tin, and that the two are being held at the provincial police headquarters.

“He had no idea that the police were going to arrest him,” she said.

Also on Wednesday, NGOs and the family of a Kampong Cham-based CNRP activist who recently went missing expressed concern that he may have been tortured or even killed.

Horm Vuthy was arrested on Tuesday, but has not been heard from since, and his wife, Khann Saron, told RFA she is worried about her husband’s safety.

“I am very concerned—I don’t know where they are holding my husband,” she said.

Kong Sivong, the CNRP chief in Kompong Cham, called on NGOs to assist in a search for the missing activist.

“We are suspicious about his situation,” he said.

“It is the responsibility of the authorities to inform the family if an activist’s whereabouts are unknown,” he said, adding that relatives are within their rights to sue the police.

Police have made multiple arrests in recent weeks, bringing to at least 36 the number of CNRP activists detained since the beginning of the year and at least 179 the number subjected to interrogation over the same period, and prompting calls from Western governments and rights groups for an end to the mistreatment. At least five activists are currently in hiding amid the crackdown.

These illegal acts by this corrupt government will only solidify the EU to pull Everything-But-Arms agreement. Once the unemployment rise people will have no choice but to protest and the Cambodian economy is going to suffer and the people are going to suffer.