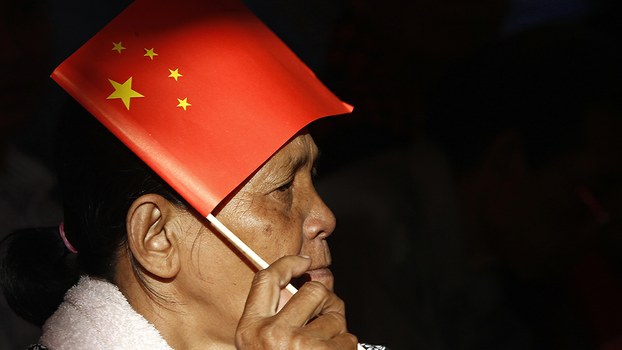 A woman shields herself from the sun with a Chinese national flag as she listens to Prime Minister Hun Sen speak during the inauguration of a China-funded bridge in Phnom Penh, July 2, 2018.

China’s top diplomat in Cambodia has dismissed criticism from Western governments over Prime Minister Hun Sen’s regime and its ties to Beijing, amid concerns over reversals of democracy following a general election widely seen as unfree and unfair and a wider crackdown on civil society.

Wang Wentian, the newly appointed Chinese ambassador to Cambodia, met with Hun Sen on Friday at the Council of Ministers building in the capital Phnom Penh, after which the prime minister posted a message to his Facebook page saying Wang had pledged to “bolster relations for the sake of people” and referring to ties between the countries as “forged in steel.”

The meeting followed one between Wang and Cambodia’s Foreign Minister Prak Sokhonn on Dec. 25, during which the two pledged to further improve bilateral relations and the Chinese diplomat expressed Beijing’s “strong support” for Hun Sen’s government, according to a statement issued Thursday by Cambodia’s Ministry of Foreign Affairs.

“The ambassador said that ‘certain foreign countries’ have criticized Cambodia over minor issues,” he said.

Hun Sen later dismissed the report, saying such a move would violate the constitution, while Cambodia’s Ministry of National Defense called it “fake news” and part of a “foreign campaign to mislead the public and the international community with the intention of destroying the country’s independence and neutrality.”

Chinese investment has poured into Cambodia in recent years and has caused some Cambodians to question what type of influence Beijing might have over their government. China and Cambodia have recently held joint military exercises and Beijing has pledged to help fund a modernization of the Southeast Asian nation’s military.

If such a naval base were built on the Gulf of Thailand, it would allow China to significantly expand patrols on the South China Sea, which Beijing claims much of, while rival Taiwan and ASEAN countries Brunei, Malaysia, the Philippines and Vietnam have their own stakes in the waters.

Political analyst Kim Sok told RFA’s Khmer Service on Friday that a Chinese naval base in Cambodia “is no small issue” because it would directly affect the stability of the country by impacting international relations and triggering anti-Chinese nationalist protests domestically.

Furthermore, he said, improved relations with China would do little to improve Cambodia’s international standing as it “plunges towards dictatorship” amid restrictions on the political opposition.

“Communists have little regard for freedom,” he said.

The Asia Times report comes amid wider cooperation between Cambodia and China at a time when Western governments have criticized Hun Sen and his ruling Cambodian People’s Party (CPP) over rollbacks on democracy in the lead up to and aftermath of a July 29 election in which the CPP effectively ran uncontested and won all 125 seats after a ban of the opposition party.

The CPP overwhelmingly won the election following the Supreme Court’s November 2017 dissolution of the main opposition Cambodia National Rescue Party (CNRP) and a five-year ban on the political activities of 118 of its senior officials for the party’s role in an alleged plot to topple the government.

The lead up to the polls also saw Hun Sen implement a severe crackdown on nongovernmental organizations and the independent media, in what was seen as a bid to eliminate criticism of his leadership.

The U.S. has since announced visa bans on individuals seen as limiting democracy in the country, as part of a series of measures aimed at pressuring Cambodia to reverse course, and the European Union, which was the second biggest trade partner of Cambodia in 2017, has said it will drop a preferential trade scheme for Cambodian exports based on the country’s election environment.

Hun Sen has repeatedly stressed that his country does not need foreign governments to recognize the legitimacy of Cambodia’s elections, saying acceptance by Cambodians is sufficient.

He has also said that he will continue to welcome aid from China, which is poised to overtake the U.S. as the world’s top foreign donor, and which is currently Cambodia’s largest international aid provider.

China, which typically offers aid to countries without many of the prerequisites that the U.S. and EU place on donations, such as improvements to human rights, offered “sincere congratulations” to Hun Sen’s party for its showing in July’s polls.

Hun Sen also met Friday with Ngo Xuan Lich, the Minister of Defense for Cambodia’s one-party Communist neighbor Vietnam, which has similarly pledged its support for his regime.

Following the meeting, Hun Sen posted a message on his Facebook page saying that Lich had congratulated him on his election victory and announced a donation of U.S. $10 million from Vietnam to construct a new building for Cambodia’s Ministry of Defense.

Meanwhile, Cambodia’s Constitutional Council on Friday unanimously approved an amendment to the draft law on political parties, paving the way for the reinstatement of rights to the 118 CNRP officials banned from politics by last year’s Supreme Court decision.

With CPP control of the country secured, Cambodia’s now one-party National Assembly recently submitted an amended version of a draft law on political parties for review to Hun Sen’s Constitutional Council, which approved it Friday and will forward it to King Norodom Sihamoni to sign into law.

The king is widely expected to rubber stamp the legislation, which would permit the 118 officials to reenter politics, although it does not provide for the reestablishment of the CNRP. Hun Sen has said the political rights of the officials will only be reinstated if they had “shown respect for the Supreme Court’s ruling,” and provided they each make an individual request.

The move is widely seen as part of a bid by Hun Sen to ease international pressure on his government in response to limiting democratic freedoms in the lead up to July’s election, in which the CPP won all 125 seats being contested. Critics have called it a “trap” aimed at fracturing the opposition.

Speaking to RFA on Friday, acting CNRP president Sam Rainsy said the 118 opposition officials have no intention of requesting permission to return to politics because there was no legitimate basis for the dissolution of their party in the first place, adding that Hun Sen had orchestrated the Supreme Court’s ban last year.

“We can’t recognize the court’s decision and we won’t ask for a pardon because we didn’t commit any crime,” said the opposition chief, who is living in self-imposed exile to avoid a string of politically motivated convictions.

Sam Rainsy also reiterated a pledge to return to Cambodia to lead the opposition before March next year, despite threats of arrest from Hun Sen, but said he could not provide an exact date for his trip.

CNRP deputy president Mu Sochua, who is also living in self-imposed exile, told RFA Friday that she intends to return to Cambodia in April and expects to be imprisoned upon her arrival.

The king of Cambodia is Saddam Hun Sen's puppet and Saddam Hun Sen is China's puppet. All in all, China is killing Cambodian people and Cambodian democracy. I hope Djibouti, Pakistan and some other countries in central Asia and Africa will never reimburse debts to China. Too bad for Laos because it's already too late and Laos has already died.