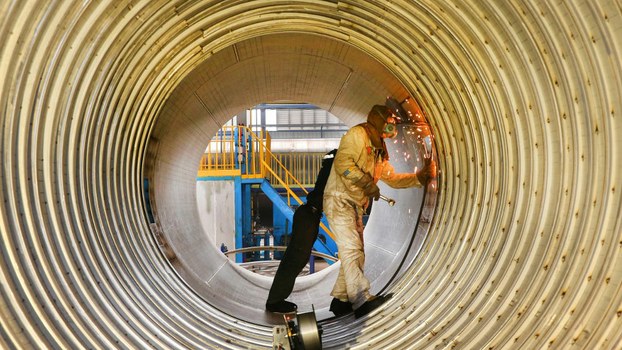 A worker welds a liquefied natural gas (LNG) tank at a factory in Nantong in China's eastern Jiangsu province, March 14, 2019.

China's government appears to be counting on inflated forecasts of domestic natural gas production as concerns about the country's import dependence grow. Gas demand has been climbing since the winter of 2017-2018, when the government prematurely ordered northern cities to switch from heating with coal as part of its campaign against smog. The government's push set off a scramble to complete unfinished pipeline networks, build storage facilities and open new port terminals for liquefied natural gas (LNG) from abroad. China's national oil companies (NOCs) also struggled to increase domestic gas production to keep up with demand after sudden price spikes and shortages left homes, schools and factories without the cleaner-burning fuel. In 2017, domestic output of gas rose 8.5 percent while consumption jumped 15.3 percent, according to official data. Last year, production increased 7.5 percent as consumption soared 18.1 percent, the National Bureau of Statistics (NBS) and the National Development and Reform Commission (NDRC) said. The widening gap between production and consumption has left China with much the same problem of rising import dependence for gas that it has already experienced with oil. Based on official figures, China relied on imports for 44.5 percent of gas consumption in 2018. Last year, domestic oil production covered only 28 percent of China's consumption, according to figures from the BP Statistical Review of World Energy. "China's reliance on oil and gas imports is growing too rapidly, with oil topping 70 percent and gas moving toward 50 percent," said Lin Boqiang, director of Xiamen University's Energy Economics Institute, as quoted by Reuters. The import risks for China have been driven home with new urgency following the attacks on Saudi Arabian oil facilities on Sept. 14. Import dependence problem

While the government has been slow to acknowledge the import dependence problem, the concern appears to be behind a combination of recent official reports on future production, including the prediction of a more than twenty-fold increase in shale gas output by 2035. In a report released on Aug. 31, government agencies projected a 10.6-percent rise in overall gas consumption to 310 billion cubic meters (10.9 trillion cubic feet) this year with continuing growth until 2050. The forecast was jointly compiled by the National Energy Administration (NEA) and research units of the cabinet-level State Council and the Ministry of Natural Resources, the official Xinhua news agency said. The agencies urged more intense development of the nation's major resource centers including the Sichuan Basin in the southwest and the Ordos Basin in the north, as well as offshore prospects, especially for unconventional, "tight" and shale gas deposits. "Through expanding development of deep-reservoir gas, tight gas and shale gas, Sichuan is likely to account for about a third of the country's total natural gas output (by 2050)," bne IntelliNews reported the agencies as saying. The NEA forecast was coupled with a report cited by Reuters and Xinhua projecting big gains in shale gas production despite results that have repeatedly fallen short of official targets over the past several years. Annual output of the gas trapped in shale rock formations could reach 280 billion cubic meters (bcm) by 2035, accounting for 23 percent of total production, said Zhao Wenzhi, a researcher at China's Academy of Engineering. The increase in shale gas would require over 500 wells to be drilled annually between 2019 and 2035, or double the number last year, said Zhao, who serves as president of the PetroChina Exploration and Production Institute of China National Petroleum Corp. (CNPC), the reports said. On Sunday, PetroChina reported at least one encouraging result, announcing that it has explored newly-added shale gas reserves of 740.97 bcm in the Sichuan Basin, according to Xinhua. But projected output increases in the near term remain modest. PetroChina expects to produce 7.7 bcm of shale gas this year, the report said. Unrealistically high shale gas targets

The forecasts suggest that the government is sticking with unrealistically high shale gas targets. There have been few signs that current production will meet earlier goals. "These numbers do look very, very high relative to what has been done so far in developing shale and tight gas," said Mikkal Herberg, energy security research director for the Seattle-based National Bureau of Asian Research, referring to Zhao's statement. China's shale gas forecast for 2035 is equal to about 45 percent of current U.S. production, while the United States has the advantages of some 15 years of technical experience, available infrastructure and more readily recoverable reserves, said Herberg. "That kind of production almost certainly would require drilling more than 500 wells per year," he said. China's shale gas forecasts have been controversial since 2012 when the NEA projected that annual production would grow from virtually nothing to between 60 bcm and 100 bcm by 2020. In 2014, the NEA slashed the target to 30 bcm after the NOCs grappled with new technology and China's difficult geology to tap a fraction of the country's estimated 25 trillion cubic meters of recoverable reserves. About half of China's shale gas reserves are at depths three kilometers (1.86 miles) below the surface, Natural Gas Intelligence reported, citing a report by the Caixin Group. Last year, shale gas production struggled to reach 10.9 bcm as foreign partners ended unprofitable efforts, Reuters reported. The slow progress offered little hope that even the revised goals for 2020 will be met. "The government has made overly ambitious projections about its shale gas industry in the past, ... and these latest forecasts are likely of the same ilk," bne IntelliNews said. In August, the international energy consulting firm Wood Mackenzie lowered its 2040 forecast for shale gas production by one-third to 88 bcm. The analysts also cut their estimate of overall gas output by 39 bcm to 325 bcm, or about 48 percent of projected demand. No alternative to doubling down

With the passage of time, the significance of China's inflated forecasts may become magnified, since import dependence is likely to rise even faster if the shale gas figures continue to fall short. But the NEA apparently sees no alternative to doubling down on its optimistic forecasts. "There is a strong element of giving the government a very optimistic view of China's ability to limit its exposure to gas import dependence as the emphasis on energy security grows in the face of U.S. trade and strategic pressure," Herberg said. The growing gap in the forecasts, which could easily top 100 bcm per year, raises the question of what China will do to make up the difference if the grand plans for shale fail to pan out. Even with faster increases in renewable resources, the country may have to choose between slowing its transition from domestic coal and raising its reliance on gas imports even further, despite the energy security risks. "Assuming China's domestic gas production rises more in line with international forecasts, dependence on LNG, pipeline imports or coal will grow. But unlike on the oil side, China has a quite diversified set of gas import supply sources of some real scale," said Herberg. China's available choices for more gas include expansion of Russia's Power of Siberia pipeline, which is expected to start flows in December, and the possible addition of new routes. Herberg sees a growing availability of LNG from existing and potential suppliers including Russia's Arctic region, East Africa, Australia and Canada, adding "real diversification to the LNG supply source to ameliorate fears of import constraints." "Also, the LNG market is rapidly becoming more liquid, flexible, price driven and less rigid and less politicized," said Herberg. "So, if shale gas production grows only slowly, I could imagine staying with rising gas imports rather than opting for a big move towards coal," he said.