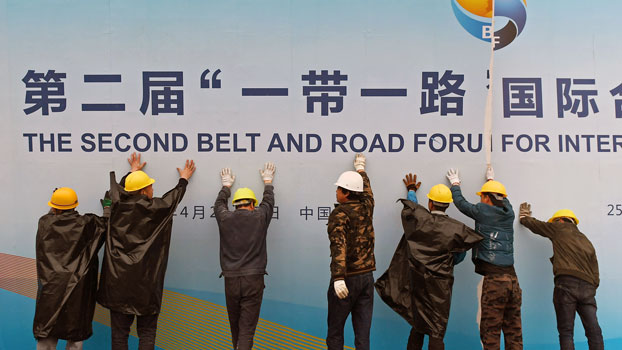 Chinese workers take down a Belt and Road Forum panel outside the venue of the forum in Beijing, April 27, 2019.
AFP

But in the first half of 2019, overseas investment plunged by over 50 percent from a year earlier to U.S. $27.5 billion, according to the China Global Investment Tracker (CGIT), which reports data compiled by the American Enterprise Institute (AEI) and the Heritage Foundation in Washington.

There was no definitive explanation for the differences in the totals, but numbers may be skewed by reporting of closing dates, as well as treatment of transactions through Hong Kong.

Both the CGIT and Baker McKenzie reports cited a slowdown in investments by state-owned enterprises (SOEs), which rely heavily on access to hard currency from state banks.

"SOEs have stopped globalizing because Beijing is hoarding foreign currency," the CGIT said.

The findings are in contrast with the well-heeled image that China has projected abroad through its U.S. $1-trillion Belt and Road Initiative (BRI) to build trade links with infrastructure projects in some 137 countries around the world.

Thanks in part to the decline in outbound totals, China's investment under the BRI banner occupies a prominent 12.6-percent share of ODI in the official six-month reporting, although even this is down from 14.6 percent in the first two months of the year.

One of the problems with relying on BRI data is that the number of countries keeps changing in year-to-year and monthly comparisons. The six-month report cited 51 countries, while the two-month report covered 48.

A report by the official Xinhua news agency on June 25 said that 127 countries and 29 international organizations had joined the BRI. The MOC's first-half report on non-financial ODI cites "151 countries and regions."

Growth comparisons are muddied further by distinctions between construction contracts and investments, which are sometimes lumped together in BRI reports, although only investment implies ownership requiring capital outlays.

"Construction, not investment, leads the BRI," said the CGIT report for the first half, citing more than U.S. $400 billion in contracts since the BRI launch in 2013.

A Xinhua report on BRI deals with 18 Arab countries on July 12 highlights the heavy weighting of BRI activity toward construction contracts.

The distinction affects the depth and endurance of China's influence abroad, as only investment implies a persistent presence for the longer term, although many developing and some developed countries continue to roll out the red carpet in hopes of Chinese finance.

Economic, trade and security pressures have weighed on China's capacity for outbound investment.

The tariff war with the United States has contributed to China's gradual economic growth slide, which reached 6.2 percent in the second quarter, down from first-quarter growth of 6.4 to the slowest pace since quarterly reporting of gross domestic product started in 1992.

The pushback on trade has weakened China's exports, which fell 1.3 percent in June from a year earlier in dollar terms, raising balance of payment concerns. U.S. curbs on Huawei and other tech giants have also crimped opportunities for growth.

The Baker McKenzie report found only U.S. $12.3 billion in completed first-half Chinese transactions in North America and Europe, dipping 18 percent from a year earlier to the lowest level since 2014.

Both reports see capital controls as a major factor.

"The principal explanation is that fear of balance of payments and exchange rate weakness has caused rationing of hard currency used to make investments and finance construction," said the CGIT report.

"Until this situation changes — and there is no sign it will — China's global business footprint cannot again approach its 2016 peak," the report said. 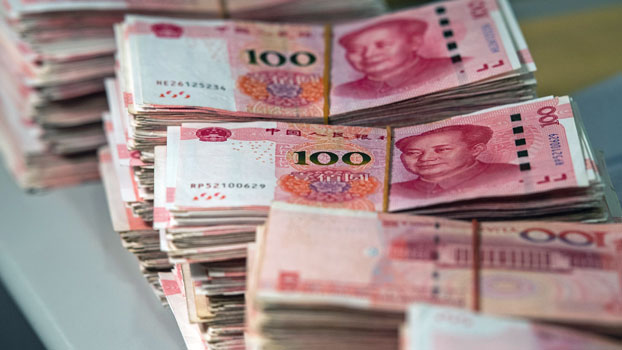 China's regulators appear to be managing against two unofficial limits that have served as guardrails for economic policy over the past several years.

The first is the People's Bank of China's (PBOC's) foreign exchange reserves, which have hovered barely above the psychological barrier of U.S. $3 trillion since falling to U.S. $2.99 trillion in January 2017.

The dip came at the end of a capital flight free fall in which the PBOC lost U.S. $1 trillion in a little over two-and-a-half years. The dive in reserves raised stability concerns, spurring a crackdown on "irrational" overseas buying with effective bans on further spending for entertainment companies, sports clubs, real estate and hotels.

At the end of June, forex reserves stood at U.S. $3.1192 trillion, the State Administration of Foreign Exchange (SAFE) said.

As external "headwinds" stall China's traditional engines of growth, the PBOC also continues to fret about the risk that the yuan will drop below the second psychological threshold of seven to the dollar from its current range of around 6.8.

It has never been clear whether the two barriers are economically critical, but crossing the lines could send a signal to investors that China is no longer able to defend them, triggering fears of capital flight.

An article by Bank of Communications analysts published by the 21st Century Business Herald on July 12 suggests that the seven-yuan-to-the-dollar barrier remains on regulators' minds.

"The (yuan) renminbi is expected to appreciate slightly against the U.S. dollar in the short run, whereas the likelihood for the renminbi (RMB) versus the greenback to break the level of seven will significantly fall during the second half of the year," the official English-language China Daily quoted the analysts as saying.

With weakening growth and external pressures, depreciation may be a matter not of whether but when.

"The government is scared on the balance of payments side," said AEI resident scholar Derek Scissors in an email.

"It wants the RMB to be able to fall below seven and official forex to fall below U.S. $3 trillion, but of course only very, very slowly," said Scissors.

"Would U.S. $2.99 trillion trigger a crisis? No, but it wouldn't stop there. They've been pulling money from state banks. The underlying issue is how much is net capital outflow," he said.

In its previous reports, the MOC has regularly claimed that "no new ODI projects were reported in the real estate, sports and entertainment sectors." But those words were notably missing from the first-half Xinhua report on July 16.

The omission may be an acknowledgment that the authorities allowed at least one major ODI deal to slip through — the U.S. $5.2-billion buyout of Finland's Amer Sports by China's Anta Sports and a consortium including tech giant Tencent.

Without that deal, the official ODI data for the first half might have looked considerably worse. The numbers suggest authorities will continue to keep capital under tight controls.