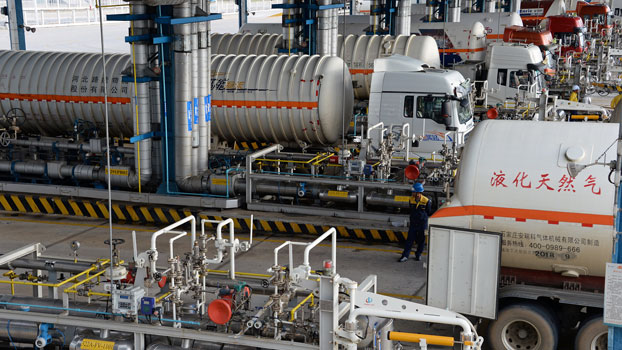 As China's consumption of natural gas continues to grow at double-digit rates, its dependence on imports is rising rapidly, as well.

The increase reported by the top planning agency has been spurred by the government’s campaign to replace high-polluting coal with cleaner-burning gas for winter heating in cities that have struggled to curb smog.

The result was a 31.9-percent increase in imports of 124.6 bcm to meet last year's demand. In 2017, gas imports rose 26.9 percent, the General Administration of Customs (GAC) said.

In January, the import boom continued as inflows jumped 26.2 percent from a year earlier to set a monthly record of 9.81 million metric tons, GAC reported Thursday.

The bottom line of all the numbers is that China's reliance on imports of natural gas has accelerated.

Import dependence for consumption rose last year to 44.5 percent from 39.2 percent in 2017, according to RFA calculations.

China's reliance on foreign gas may not be as problematic as its dependence on imported oil, at least not yet. But the 2018 figures suggest rapid growth that could soon top recent forecasts.

According to a projection from the Paris-based International Energy Agency in November, China's reliance on foreign oil will grow from 69 percent in 2017 to 82 percent in 2040. Import dependence for gas was expected to hit 54 percent by then.

The government is counting on technically-challenging shale gas development to slow the growth of import dependence down.

The twin dependencies for both oil and gas may raise the risk of a supply disruption. But so far, China's government has shown little sign of concern over the energy security risks.

"This trend has been developing for a while," said Edward Chow, a senior associate for energy and national security at the Center for Strategic and International Studies in Washington.

"The Chinese government must have decided that its domestic political needs to stem pollution are more important than concerns over gas supply security and that its efforts to diversify gas import sources and supply routes will be successful in protecting against a clear vulnerability," Chow said.

So far, China has been most dependent on imports of tanker-borne liquefied natural gas (LNG), which accounted for nearly 60 percent of total gas imports last year.

In a recent analysis, Platts Commodity News argued that expected gains in domestic output and pipeline imports will slow the pace of LNG import growth in time.

A relatively warm winter in China this year has also helped to avert a repeat of the demand crunch that led to a shortage crisis in December 2017.

A slowing economy may also cut into demand this year, taking some pressure off the market.

New compressors in Kazakhstan on China's pipeline system from Central Asia are expected to boost imports by 5 bcm, alleviating concern that deliveries were bumping up against the network's annual capacity of 55 bcm.

China may also be able to count on another 5 bcm of supplies in 2020 after the opening of Russia's giant 4,000-kilometer (2,485-mile) Power of Siberia pipeline, scheduled for this December. The project is designed to deliver 38 bcm per year sometime after 2025. 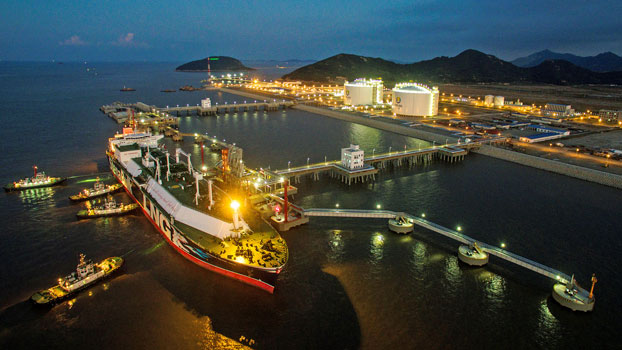 But pipelines may only reduce rather than eliminate China's risk from rising import dependence. The government has already shown its sensitivity to the potential for market disruption this year.

In January, the NDRC took pains to issue a statement denying a report that Turkmenistan had cut its supplies to the central pipeline system for the second winter in a row.

The report by the Chinese website jiemian.com was "not accurate," the NDRC said. The risk that shortages from the country's biggest supplier would drive up gas prices also amounted to "hype," said the agency, according to the Communist Party-affiliated Global Times.

Last year, the pipeline system from Turkmenistan through Uzbekistan and Kazakhstan pumped 46.9 bcm to China, or 37.6 percent of the country's gas imports, the Turkmengaz state company said.

But according to Reuters, the NDRC admitted that deliveries from Turkmenistan's state-owned Konzern energy enterprise had fallen "several times" in November. Volumes were expected to return to normal "soon," the commission said on Jan. 8.

"Supplies from Konzern were unstable in November, but it had limited impact on domestic gas," the NDRC said.

The episode seemed to be a repeat of problems with gas from Turkmenistan after a series of equipment failures in December 2017 were blamed for aggravating shortages last winter and driving up LNG prices to record highs.

The government and CNPC appeared to respond to this season's disruption by delaying the reporting for over a month and then capping domestic LNG prices at below last winter's rates after the problems were disclosed.

"The NDRC vowed to crack down on market-fixing and price gouging of natural gas to ensure 'proper order in the natural gas market,'" the Global Times reported.

CNPC said it will "actively stabilize the LNG price and maintain steady order in the gas market," the paper said.

In a blog posting, CNPC's PetroChina subsidiary sought to minimize the impact of the shortfall from Turkmenistan, saying that the supply fluctuations were equivalent to just 1 percent of the pipeline system's average monthly volume, Reuters reported.

After a crash program last year to create adequate storage facilities for emergencies, China had some 9 bcm on hand in January including gas held by oil majors and LNG in tanks, an NDRC official told the Global Times.

The volume is equal to about 26 days of imports at average daily rates for 2018.

In 2017, the international energy consultancy Wood Mackenzie said China had only 8 bcm of storage capacity, or one-fourth to one-sixth of the amount available in the United States and Europe in relation to demand.