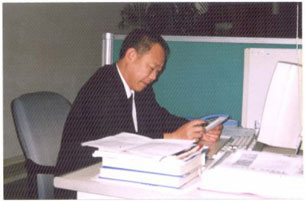 Author Qin Geng was sentenced to "reform through labor" for counterrevolutionary crimes in the wake of the 1989 student-led democracy movement on Tiananmen Square. His book, "China's No. 1 Crime" contains a frank and compassionate account of his time as a prisoner of conscience, extracts of which were published by RFA's Mandarin Service in April, 2015:

Cold manacles on an autumn night

"[I remember that] the hard seat carriage was packed full of passengers; Chinese people who all looked like they'd come through the famines, beads of sweat standing out on their faces, tattered clothes, keeping a tight hold of their simple and crude bags. The crucial thing was that there were no expressions at all on their famine-ravaged faces. All I could see was numbness and skeletal stiffness.

I started to weep without even knowing it. To be alive in China is to sink to such depths, without any knowledge of the basic rights of human existence, nor any way to shoulder the most fundamental burdens of being human. In that moment, despair overtook me.

I felt the cold of the handcuffs biting into me in the early hours of a cold autumn morning. I moved my hands in front of my face and closely inspected the structure and texture of the handcuffs, speaking exaggerated words of praise out of grief: "The quality of the steel isn't bad!"

I took an enthusiastic look around at what was to be my home. My conclusion was that the quality of accommodation really wasn't that bad. It was far better than the housing some of the farmers lived in that I'd seen during my time as an official, when I was sent down to the countryside.

I swear that I had no intention of escaping. I was merely curious. After all, a person has a right to familiarize themselves with their own home, right?

My only gripe was that it was too closed off. It was a dungeon. Why couldn't they have at least put bars on the wall of the cell that faced the courtyard?

Detention center director Guo told me something that astonished me. Apparently they have been referring to me all along as as "the top drawer nobility in cell No. 11"! I clearly wasn't savvy enough to have grasped my social standing in the slammer.

I even felt a bit of pride when he said that, at having committed "China's No. 1 crime."

With that, this burly young chap grabbed my bookish, weakling hands and very effectively locked them together. Whether those manacles were forged by Pockface Zhao or Liu the Blacksmith in the local county town, they were a pretty nifty invention. They should apply for the patent.

My cell 'boss' has a blond beard

In the pen, you can tell who's in charge by their sleeping position. Some sleep right up against the wall, with their backs towards it to defend against attacks from behind. But if you turn your face towards the wall, you gain some privacy regarding your facial expression.

So the No. 1 guy in the cell will usually put his mattress right up at the end of the wall, with his No. 2 sleeping right next to him. It's a bit like the honor of sitting on the podium when Chairman Mao is on it, but he also comes under No. 1's protection.

In my case, there are no enemies in front of me; only danger from behind, but I will use my back to shield myself. At least I can have a fairly enclosed psychological space. Sometimes, I even smile at life's adventures, that I get to sleep in such a magical place.

Jail is not so scary, really. I went into it smiling, and I came out smiling, too. Chinese people will only throw off the deterrent of jail if they conquer their fear of going to prison.

They won't achieve freedom if they are constantly avoiding jail. For Chinese people, jail is a portal that leads directly to freedom.

As I write in my prison diary: "Jail is like home."

When I look back at how I managed to keep smiling, I hope that, no matter which police officer is looking through their leather-bound files, when they look at mine, they'll see a radiant, smiling face.

On getting out of prison

The whole of China is a huge prison. I am merely sitting in a small part of it right now. Even if they let me out of the steel gates right now, I'd still be in the bigger prison.

I have no freedom here, but I wouldn't be free even if I passed beyond these doors. That's why I don't feel that there is much to celebrate or be happy about today. The little prison and the big prison are the same thing: they are both prisons.