Macau Calls For Calm in Wake of U.S. Money-Laundering Charge 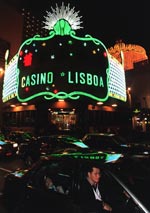 HONG KONG—The Macau government has called on its citizens to remain calm after bank customers queued into the street Friday to withdraw millions of dollars from branches of Banco Delta Asia, following allegations from the U.S. Treasury Department that it laundered money for North Korea.

"We want to take this opportunity to call upon depositors and citizens to keep calm," a statement carried on the Macau Special Administrative Region Web portal said.

"Do not easily listen to ungrounded rumors, have faith and confidence in the financial system of Macau, and continue to support the long-term stability and prosperity of the financial industry of Macao," said the statement.

Customers withdrew more than 40 million patacas (U.S.$5 million) Friday, in spite of denials by the bank at a hastily convened news conference.

Bank has ties with North Korea

According to the U.S. Treasury Department: "Banco Delta Asia has provided financial services for over 20 years to Democratic Peoples Republic of Korea (DPRK) government agencies and front companies."

"Banco Delta Asia's special relationship with the DPRK has specifically facilitated the criminal activities of North Korean government agencies and front companies," said a statement issued by Stuart Levey, the Treasury's Under Secretary for Terrorism and Financial Intelligence Sept. 15.

Raphael Perl, specialist in international affairs at the Congressional Research Service (CRS), told RFA's Korean service that the CRS had also been watching the bank, which has just eight branches and four offices in the former Portuguese enclave.

"We have been watching this bank for a long time, and there is no doubt in the mind of U.S. government officials that it is being used, whether willingly or unwillingly, but we say willingly, by the North Korean government to facilitate criminal activities," Perl said.

"We are going to trigger sanctions against the bank, and prohibit our banks from doing business with them. And we are going to urge other countries to do the same," he added.

"We are surprised at such allegations," Wong told reporters. He said the bank had never been approached for evidence by any U.S. agency.

He confirmed that the bank had had a business relationship with a number of North Korean banks and companies spanning more than 30 years.

But he said the bank had always strictly followed international regulations to prevent money laundering.

"We welcome the inspection from the Monetary Authority of Macau and the U.S. Department of Treasury," Wong said.

"We have nothing to do with illegal operations, and we don't know why the U.S. at this time publicizes such rumors," Li told RFA's Mandarin service.

Known for its freewheeling attitudes, casinos and gang violence, Macau, a tiny territory comprising just two islands and a peninsula in southern China's Pearl River delta was returned to Chinese rule in 1999.

Delta Asia chairman Stanley Au, who is also a local lawmaker and former gold trader, called the allegations "a big joke" via a telephone link to the press conference.

Speaking from Dubai in the United Arab Emirates, Au chuckled: "I am bathing in the beautiful sunshine on an Indian Ocean beach."

But he said the group had transferred enough funds from its Hong Kong subsidiaries to handle the run on the bank in Macau, and pledged legal action in the United States.

Levey's report claimed that senior officials in Banco Delta Asia were working with North Korean officials to accept large deposits of cash, including counterfeit U.S. currency, and agreeing to place that currency into circulation.

"One well-known DPRK front company that has been a client of Banco Delta Asia for over a decade has conducted numerous illegal activities, including distributing counterfeit currency and smuggling counterfeit tobacco products," Levey wrote.

"In addition to facilitating illicit activities of the DPRK, investigations reveal that Banco Delta Asia has serviced a multi-million dollar account on behalf of a known international drug trafficker," the statement said.