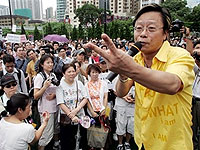 HONG KONG—Hong Kong pro-democracy legislators have voted down proposals for political reform backed by central government in Beijing, calling them "shoddy goods", amid calls for further consultation with pro-democracy politicians.

In a tense debate that lasted more than four hours Wednesday, members of the territory's Legislative Council (LegCo) voted 34 for and 24 against plans to add 10 seats and double the size of a hand-picked election committee which currently elects the chief executive. Constitutional changes need the support of two-thirds of the chamber, or 40 members.

"Even the finest words can't make a silk purse out of a sow's ear," pro-democracy legislator Mary Tam told reporters after the vote.

Democratic Party spokesman Cheung Man-kwong said there was no need for him to comment, because he couldn't put it better than Mary Tam had.

Wednesday's vote is unlikely to go down well in Beijing, which stepped in with a controversial interpretation of Hong Kong's mini-constitution, the Basic Law, in April 2004, ruling out a move to universal suffrage in the 2007 and 2008 elections.

The Beijing-backed Ta Kung Pao newspaper warned Hong Kong ahead of the vote that "the goal of achieving universal suffrage will become a more distant reality" if the government's reform package was voted down.

Speaking on RFA's Cantonese service, former Commercial Radio talk-show host Wong Yuk-man said the reforms were unacceptable because they represented a backsliding on the Basic Law, which stipulates "gradual progress" towards universal suffrage, when all 60 LegCo seats will be directly elected.

"This isn't "gradual change" at all. It's just the government shuffling around a few concepts, muddying the waters of rational thought and trying to distort reality, and then blaming the whole thing on the pro-democracy camp," said Wong, whose contract with Commercial Radio was terminated last year after Wong took leave citing anonymous threats to his personal safety.

Secretary for Constitutional Affairs Stephen Lam said the defeat of the government's proposals would damage relations between central government and the SAR, and that the pro-democracy camp would be held responsible by history.

And Beijing-based People's University professor and former Basic Law drafting committee member Xu Chongde said the voting down of the proposals was a matter for regret, accusing pro-democracy politicians of a knee-jerk reaction. But he said the plan's defeat wouldn't affect relations between central government and the pro-democracy camp.

"For the past few months, I have been hoping for a Christmas present from the Legislative Council, and unfortunately it hasn't come true," Chief Executive Donald Tsang told reporters after the defeat of his proposal. 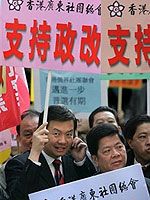 "We have lost an opportunity to take a significant step towards democracy." Tsang said the government would accept the legislature's decision. "Democratic development doesn't stop here," he pledged.

Tsang has let it be known that he personally favors universal suffrage for Hong Kong "the sooner, the better," but he has lobbied hard for the government's limited reform plans, appearing to believe that they are necessary to win support and trust for further reforms among China's leadership.

China's leaders were caught unawares in 2003 when half a million people took to the streets to protest proposals for a widening of police and state powers under national security legislation.

And hundreds of thousands marched for universal suffrage on July 1 last year, the seventh anniversary of the former British colony's handover to Chinese rule.

"Everyone knows that last year's interpretation was in effect an amendment to the Basic Law, intended to block further progress towards democracy in Hong Kong," Wong Yuk-man said in a commentary aired Wednesday, in which he called on the government--and Beijing--to come up with a dish that was more to Hong Kong's taste.

"It is unjust in the extreme to backslide still further and blame the pro-democracy camp. You can be sure that the people of Hong Kong are watching and waiting to see what your next move will be," Wong said.

"I think the SAR and central governments have to ask themselves if they are really backsliding on previous commitments. You came up with this proposal, which turned out to be a dish that is not to most people's taste. So perhaps you can cook us up a different one?"