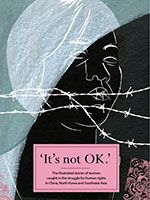 WASHINGTON – Ahead of Human Rights Day, Radio Free Asia (RFA) today unveiled an e-book profiling the lives, work, and sacrifice of women from Asian countries and regions under authoritarian rule taking up the fight for human rights on their families’ and communities’ behalf. ‘It’s not OK’ collects and presents portraits of these remarkable women, whose often untold stories demonstrate courage under fire, in China, Southeast Asia, and North Korea. The book is available in English for a free download for iPads and tablets. Along with the e-book, RFA is launching a companion website with additional related content.

“Whether fighting for their homes at Boeung Kok Lake, demanding answers in the disappearance of her husband, or making sure her traditions and culture are passed on to younger Tibetans, these women all share one essential quality – an unyielding strength of spirit,” said Libby Liu, President of RFA. “They never sought the fight, but took it up without hesitation the moment they refused to accept injustice and inhumanity.

“With this project, we aim to put a spotlight on these extraordinary Asian women whose struggle is seen to be a universal one for fairness, compassion, and justice.”

Each portrait selected by RFA’s nine language services is based on RFA reporting and interviews over the years, in addition to other sources. The e-book also includes multimedia content, including video, graphics, and illustrations, the latter of which were created by the Broadcasting Board of Governor’s Office of Digital & Design Innovation (ODDI). On Wednesday, Dec. 10 from 10:00 to 11:30 a.m. ET, the project’s executive producer, Catherine Antoine (@antoinec) and RFA staff, will answer questions about the e-book and the women’s profiles via Twitter (questions should use the hashtag #HerStoryTold).

The women featured in this edition are: from China, Ding Zilin, a Tiananmen mother, and Jiao Xia, the wife of  jailed investigative journalist Qi Chonghuai; from Vietnam, Đỗ Thị Minh Hạnh, a young labor activist recently released from jail; from Myanmar, Zin Mar Aung, a former political prisoner who helps other recently released prisoners; from Cambodia, Yorm Bopha and Tep Vanny, land rights activists; from North Korea, Lee Ae Ran, the first North Korean defector to obtain a doctoral degree who helps other defectors in South Korea; from Laos, Ng Shui Meng, wife of missing Lao activist Sombath Somphone; from China’s Tibetan regions, Rinchen Khandro Choegyal, who supports overseas Tibetans and nuns in India; and from China’s Xinjiang Uyghur Autonomous Region, Patigul Ghulam, who has been jailed several times for demanding information about her son's whereabouts since he disappeared in July 2009. RFA plans to release a second edition in March 2015 with more profiles and content.